amichaiJuly 8, 2014general, writingsComments are off for this post
It’s 10:50pm and I’m sitting in our courtyard in Jerusalem, it’s quiet now, but I’m still shaking, overhearing people talking in the homes nearby, TV’s glaring, a tense waiting.
The past ten days – but esp. the last 48 hours blur and to keep sane I’m just going to write down moments, slides in this surreal slide show, to remember, to try and make sense, to share with friends, to let it somehow out.  Anyway, I don’t think I’ll get much sleep tonight.
50 minutes ago I parked the car on the side of a hill, outside a small village on the outskirts of Jerusalem – maybe 8 miles away. A few of gathered with firewood and wine and fruit and mats to go dip in a spring and celebrate a birthday. As soon as I parked we heard the sirens from across the vast valley, assuming it was further down in Beit Shemesh where sirens were already heard today. Then a thud – really loud – very near by, the car windows shook. Then silence.
A stunned moment later R. calls from home – do we wake the children? is the basement safe enough? I didn’t understand at first – and then I got – the sirens were in Jerusalem and the thud we heard was heard there too.
I’ve been through sirens before and missiles and shelters. But my children haven’t. I can’t quite explain the feeling of horror. It’s a game changer. I quickly said goodbye to my friends, who debated whether to stay or not, and got back into the car. On the way back to Jerusalem I saw fire trucks and police cars speeding in the opposite direction – towards the area I had just left. 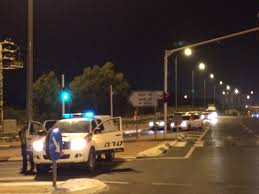 I started shaking in the car, radio on with reports and confusion and attempts to stay calm.
The kids didn’t wake up, neither did my father. As of now, the wave of missiles subsided, while the planes can still be overhead above.
It’s a war night. I can’t believe it. And yet, I can, and here we are again. Waiting for news. Just don’t wake the kids. Please, let nothing happen.  It becomes so selfish, so about the here and now. At least I stopped shaking. For now.
From the neighbors’ talk I hear the updates of how many fell and where. And also – soccer. Germany is winning. So far  – none we know of hurt in Israel.
Today was my father’s 89th birthday. He slept through the siren and I hope there are no more to startle him. He’s been through a Holocaust and every single one of Israel’s wars. This coming Friday we are all supposed to gather and celebrate his birthday. Who knows? At least one of my nephews has already been called up to reserve duty. Will we be in the mood anyway? We’re back to day by day planning. Just like that. S. calls from NYC. He was supposed to fly over tonight but decides to cancel. Who knows what lays ahead? Will the airport function? I tell him not to panic – and remind myself the same.
God knows what’s going on in Gaza.  How many more dead?
—- 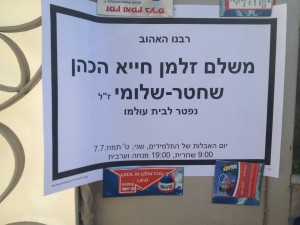 Yesterday I sat Shiva: Mourned my teacher, Rabbi Zalman Schacter Shalomi, sitting in another garden in Jerusalem, along with others of his students and disciples, many dear friends of mine, united in our grief and in our gratitude for all his teaching, for his gracious death. 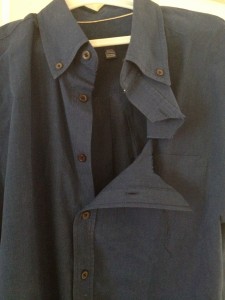 A few of us rose to perform the ritual of ripping – kriaa – making a tear in one’s garment as a sign of mourning. Usually reserved for close kin, this visceral rite is optional for the students of a rabbi or teacher whose instruction was critical to their lives. Reb Zalman was responsible for many critical turns in my life and in some ways for my return to a Judaism I could not just handle but relish – and take on. He blessed my choice to father, and to become a rabbi, and to be just who I am. I wept, along with the others, as the small pair of scissors cut through my shirt and as I pulled at the tear and ripped my shirt apart, exposing skin and hair and heart and loss.
Soon after, with torn shirt, I got into my car and drove 30 min. to nearby Modiin to address a group of Masorti/Conservative Israeli rabbis – my teachers and colleagues – in a conversation about new ways of making prayer meaningful and accessible, comparing the social realities and spiritual needs  of Jews in Israel and the US. It was an interesting conversation. Though I regreted leaving my friends behind in Jerusalem as they shared Reb Zalman stories I felt that it was my duty to share his vision and ideas with this group of rabbis, some more open than others to embrace his radical notion of paradigm shift.
When I walked out of the bomb shelter converted into a synagogue (I’m assuming it’s open tonight, just in case) it was 3pm and I decided to drive the 20 minutes to nearby Nof Ayalaon, where the Frankel family was still sitting Shiva for their son Naftali, one of the three murdered teens. I don’t know the Frankels but they are close friends of my brother’s, and, besides, everybody knows them now. Rachel Frankel stood in front of the world reciting Kaddish, begging for lack of revenge, winning hearts with dignity, courage, faith.
A small crowd gathered outside their house and a young man, apologized – the family is exhausted, it’s the last day of Shiva, and they ask that people sign a guest book instead. I took my time to write a message and drove off – only to discover that another suspected kidnapping has just been reported in near by Modiin – the entire road was blocked, bumper to bumper for miles. 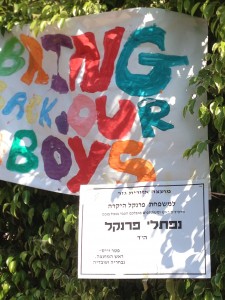 It took me three hours to get back to Jerusalem. That whole time I really needed to pee.
It turned out to be a false alarm. No kidnapping. But the soldiers stopped every car and searched carefully. The mood all around was tired and tense.
Also during that time, some of my fellow Reb Zalman students decided to leave the Shiva and drive off to Shuafat  – to visit the Abu Khadir family who is mourning their burnt son. They made it there – and later shared the moving story – including the fear, some hostile accusations, many simple gestures of goodwill and honest appreciation, the suspicious police, the need to get out of there in a hurry as things seemed to heat up.  An hour after they left and we all met back as the sun began to set and Reb Zalman’s Shiva day almost over, news broke out of riots in Shuafat, stones, tear gas, right outside the tent of mourning.
350 more went today, to honor the family and pay respect. 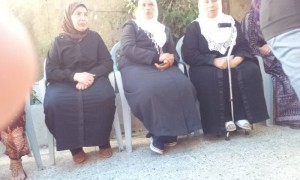 I got home exhausted last night, sweaty, all cried out, took off my torn shirt and wondered what to do with it. Throw it out? Keep it somewhere? Several years ago I took the torn white shirt my father wore while sitting Shiva for his older brother and turned it into an art object. Another one? I decided to take a photo of it, shove it in a drawer and decide tomorrow. Anyway, two more weeks before I head back to NYC. I’ll deal with packing when that time comes.
That tomorrow is today. It’s still in the drawer and yesterday seems like a week ago.
Before I went to sleep  last night I sat down to write about the last time that I saw Reb Zalman – actually – on Skype. About six months ago I officiated the wedding of his good friend Theo -to my good friend Aimee. The wedding was in LA and Reb Zalman wasn’t able to travel from Boulder. He sent me emails with instructions and suggestions, we spoke on the phone a couple of times. It was, in fact the first and only time he guided me one on one on a matter of ritual performance. During the ceremony he skyped in on a ipad, watching and smiling and then offering the priestly blessing to the newly weds.
We emailed afterwards but that was the last time I saw his face and heard his voice. The last word I heard him say was the last word of the priestly blessing: Shalom.
With nothing else to do right now but bite my nails and catchup on emails and listen to the news (soccer, rockets) I finish writing this, and deciide to clean up my room, pick up that torn shirt, fold and put away in my suitcase for some reason that I can’t quite understand, chanting to myself the haunting melody that Gabriel Meyer taught me to the priestly blessing, thinking of the tiny silver scroll found on a hillside just a mile from here, 3,000 years old with those very words, same prayers and hopes: Please, somehow, let there be peace.
Or at least a ceasefire.
For everyone, everywhere. Amen.
And with that prayer, and with sheer exhaustion, I will now try to go to sleep.
Amichai Lau-Lavie
July 8 2014