amichaiOctober 17, 2013Unscrolling, Weekly Torah BlogsComments are off for this post

Unscrolling: This year I’m reading the weekly Torah portion through the eyes of 54 creative wrestlers in Reboot’s new book Unscrolled. My year long journey will be blogged weekly as commentary on their commentary, quoting quotes, plucking pearls from this pool of biblically inspired juices for a more inspired now. 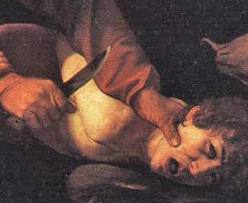 The line between faith and insanity is sometimes as sharp as knife.
Anne Reidy, the stenographer who stepped calmly  up to the microphone in the Senate this past week to denounce the politicians for not obeying God (and something about masons) was dragged out and sent for evaluation. Clearly, a person taking advantage of access to power and chooses, like a prophet, to call out their version of God’s truth to the masses is a psychopath. Or at least ‘slightly off’.
Or is she?
Reidy isn’t the first to publicly blur lines between  pious and psychopath. Our Patriarch Abraham got there first.
Damon Lindelof  thinks so, anyway. In Unscrolled, chapter 4, he takes on the MegaMythic Binding of Isaac,   sending  Abe to the psych ward,  diagnosed for ‘Cycloid Pscyosis’,  interrogated repeatedly in the aftermath of his attempt to kill his son. Is he crazy – or what?
Abraham is often seen as the ‘knight of faith’ for his will to obey God’s demands, including child sacrifice. But his is a small step and big leap from faith to fundamentalism. For all of us who want to be connected to spiritual truths but worried about ethics and not foaming in the mouth – he’s a very problematic role model.
Which is maybe why this mega myth  is at the core of our cannon.
This is a crazy story about the crazy state of mind called faith. Damon messes with our minds here as he likes to do so well and suspends our disbelief:  If Abraham is really crazy – what does that say about the faith tradition that reveres him and annually relives his legacy  of religiously inspired violence?  What does this say about us?
Maybe the whole point of repeating the story of this Psychotic Abraham is to serve as a warning sign, a telling tale of caution: watch out for when religious fervor turns to force,  respect, suspect, and resist it.  Notice this voice Inside ourselves and all around us. Sometimes we miss the signs until its too late and gets out of hand.
Reidy didn’t hurt anyone. But there are so many examples of people fueled by faith who take the lives of countless others.
That’s what happened in Tel Aviv, 15 years ago, this week. Yitzchak Rabin was shot by a zealot who said that God told him to do so, for the sake of the Land of Israel. Psychopath? Not legally. Yigal Amir is serving life sentence in top priority Israeli prison.
President Clinton talked about the Binding of Yitzchak at the funeral in Jerusalem, the only leader to quote Torah and link the myth of sacrifice and binding to the price paid by this latter day Isaac, and still paid today by so many people. In the so called name of God.
I want to believe that the story of the Binding is an allegory for our inner ability to give up what’s precious for a better and more deeply connected sense of being in the world. I don’t want to endorse a saga that celebrates a parent’s ability to sacrifice a child. Not even as allegory. It’s crazy and unhealthy. Enough is enough.
Can we be unbound from the Binding?  Can we retell it differently and embrace a bit less crazy in our lives of faith?
(If Damon was still on twitter I’d hope he rt this homage but he  and I guess that’s his way of sacrificing something precious for a greater good? )
just famously quit
Crazy for some. Sacred for others. Go figure. In peace.

Related Articles
UNFRIEND PINCHAS: A Response to Jewish Racist Violence – Then and Now.
Still No Abomination. My Imagined Bar Mitzvah Speech is back
Deviation as a Blessing in Disguise. Word 43