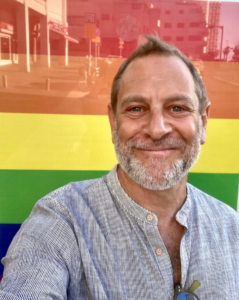 Rabbi Amichai Lau-Lavie (he/him) is the Founding Spiritual Leader of Lab/Shul NYC and the creator of Storahtelling, Inc. An Israeli-born Jewish educator, writer, and performance artist, he received his rabbinical ordination from the Jewish Theological Seminary of America in 2016. Rabbi Amichai is a founding member of the Jewish Emergent Network, serves on the Leadership Council of the New York Jewish Agenda, is a member of the Global Justice Fellowship of the American Jewish World Service, the Advisory Council for the Institute for Jewish Spirituality, an advisor to teh Jerusalem Open House, and is a founding faculty member of the Reboot Network.

Rabbi Amichai has been hailed as “an iconoclastic mystic” by Time Out New York, a “rock star” by the New York Times, a “Judaic Pied Piper” by the Denver Westword, a “maverick spiritual leader” by The Times of Israel and “one of the most interesting thinkers in the Jewish world” by the Jewish Week.  In June 2017 Rabbi Amichai published the JOY Proposal, offering a new response to the reality of Intermarriage and taking on a personal position on this issue, including his resignation from the Rabbinical Assembly of the Conservative Movement.

In 2022 Rabbi Amichai began publishing Below the Bible Belt, a daily digital project extended over 42 months, critically queering and re-reading all 929 chapters of the Hebrew Bible.

Amichai is Abba to Alice, Ezra and Charlotte.