Rabbi Aharon Lichtenstein, one of the great leaders of this generation, passed away today at the age of 81.
During one year of my life he was my teacher, as one of the two leaders of Yeshivat Har Etzion where I studied in 1986. He was a formidable giant, the first rabbi I knew who also had a PhD in English literature, quoted Shakespere along with Maimonides, advocated for real peace between Israelis and Arabs. He also loved classical music, and the one personal story I recall of him is about  the Messiah – not the Jewish one  still lingering- but rather Handel’s musical version.
Back in ’86, instead of completing my senior year of High School I attended the Gush – the yeshiva in Alon Shevut – 30 min. out of Jerusalem. It was good to get away from home, immerse myself in studies, explore prayer, take long walks in the fields there and listen to music, and weep. These were months of big questions for me – identity forming.
Twice a day the Yeshiva students were woken up to prayers – early in the morning and mid afternoon, after an afternoon break/nap. I don’t recall how I got drafted into the task for choosing music that will be played over the PA system, for all to hear. Maybe it was even my idea.
I edited a selection from the oh-so-1980’s-popular ‘hooked on classics’ – easy listening hits from the best of classical music. The first week was a success. People preferred waking up to classical music over whatever was there beforehand (I have no memory of what THAT was) even Reb Aharon was heard whistling Mozart on the way to the afternoon prayer, echoing what was just played. All was well. I got pats on the back.
But then, one afternoon, the PA system woke us up with a medley that included highlights from Handel’s Messiah. A co-ed choir sang out Hallelujahs and a few lines about the Saviour that were, well, way out there for an Orthodox Yeshiva, even as modern and progressive as this one.  Oops.
I was summoned to see Reb Aharon that evening, led by one of the other rabbis to his spot at the front of the study hall, crammed with hundreds of students, all learning out loud.
I was terrified. But he was kind, though firm in his rebuke and the decision that should music be played out loud for our benefit, it must be more carefully chosen and include no liturgical language that conflicts with our own. And no female voices, either, of course.  He thanked me warmly for the initiative and expressed hope that I will stay in the Yeshiva longer and that was that.
But I didn’t. The music mix continued, with someone else in charge.
In retrospect, it was perfectly reasonable. But I was a rebellious ,questioning 18 year old and any form of restriction or censorship seemed like a personal affront on who and what I was.
Several months later, for various reasons, I changed Yeshivas, opting for a more liberal one, within the green line, on the grounds of a kibbutz, where many wore shorts and more was tolerated and no PA system was needed since it was so cozy a place.
But Reb Aharon remained a force to reckon with, a voice of reason, a beacon of tolerance and peace inside an increasingly intolerant modern orthodox world. The world he represented – that of his father in law, Rabbi J. B. Soloveichick, who stood for the fusion of Torah and Science – is a world fading out, changing, evolving, no longer the Orthodox world I grew up in.
This past week at my congregation in NYC we paused to listen to the silence of Aaron the High Priest, as he stands by the death of his two sons.
Reb Aharon, who, like the original Aaron, was known as the one who pursues peace and makes peace among his people  is silent today. He will no longer teach law or whistle Mozart. But his voice, inspiration, Messianic aspirations, with or without the help of classical music, has guided generations of leaders and thinkers and will continue to do so.
I am honored to have been one of his students, if only for a little while. I am grateful for the teaching of a master who taught me how to navigate loyalties and passions and walk the talk of faith, law, love of beauty and human dignity. 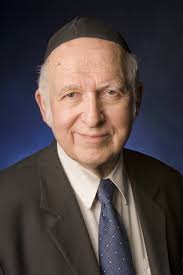 May his family, friends and countless students by consoled and comforted. May his righteous memory be a blessing for us all.
זכר צדיק לברכה