amichaiFebruary 7, 2013WORDComments are off for this post
WORD: A Word a Week from the World’s Best Seller. Follow the Annual Torah Re-Run Series with Amichai Lau-Lavie’s Newest Year-Long Blog. To subscribe via email click here. To listen to the audio version click here. 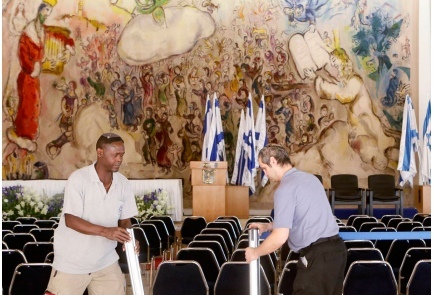 It’s not that I feel old or unaccomplished at 43 but I was startled by how many of the new members of Knesset are younger than me, or just about my age. Whatever happened to “Elders”?  Are leaders getting younger or am I just getting older? Or both?

I watched the official swearing-in of the 19th Knesset on TV with my parents, and was really moved by the ceremony and esp. by the glowing faces of a few friends of mine, standing up to state their commitment to the government and the people and a better future for us all. One by one, each of the 120 members rose in their seats to declare “I commit’ to public service.

When Obama (who at 51 is still on the youngish side) visits Israel this coming spring (Wouldn’t it be awesome if he comes for Seder?) he will meet Lapid – who’s a few months younger than him, Bennett who’s 40 and Stav Shafir – at 28 the youngest women to sit at the Knesset.  Feels like teen spirit? Not exactly, but it sure feels like fresh energy and a leadership that understands the world as is and as will be through a more contemporary lens, more digital than analogue. It’s mostly a good thing and hopefully can help make new realities happen.

But what about the sages of ages? That whole ‘the older you get -the wiser?’ Where, in our youth-obsessed culture, is there room and respect not just for young sexy and restless but also for the real role of elders? For patience, humility and the wisdom that comes with wrinkles?

Elders, back in the Biblical day meant those who had  beards. The word for Elder – Zaken, and the word for beard – Zakan are written the same way in Hebrew, though pronounced a bit differently. It’s a not so subtle statement about gender roles but also, possibly about age and status.  And the very first time in which an official gathering of the Seventy Bearded Elders of Israel is convened happens in this week’s Torah text, Mishpatim:

“Moses climbed, with Aaron, Nadab, and Abihu, and seventy of the elders of Israel” Ex 24:9

The scene is auspicious: Yet another rendition of the Revelation at Sinai, but in this version Moses does not arrive alone for the Summit Meeting with God.  He has an entourage: The High Priest and his two heirs are followed by the first official public body-politic of the Jewish people – seventy anonymous leaders. No names or stats are available, but we’ll assume no women, and no Ph’ds. Probably beards. Who were these founding fathers? How old were they? How were they chosen? What was their role? And why seventy?

We won’t know the answers to most of these questions. The number of elders, for instance, is a Talmudic debate. During the Second Temple era and right after the destruction there is mention of an assembly of seventy, or seventy two. But there is also talk of 120 members of the Great Assembly – the first Knesset. This was the number that inspired the first Israeli Knesset back in 1948.

There is another direct link between the first gathering of Elders in Exodus and the 19th Knesset. The 120 members, along with family members and guests gathered at the Chagall Lounge after the swearing-in ceremony to raise a glass and enjoy one last friendly moment before the political agenda start stirring the pots. Moses, the Torah, and the Seventy Elders were depicted by Chagall on one of the three tapestries that dominate the room since 1966.

Regardless of age, agenda, gender or faith – let’s hope that this new gathering of state leaders waste no time in making good on the many promises and, like Moses and his elders, bring us one step closer to Divine truth, shared responsibilities, and a better life for all.