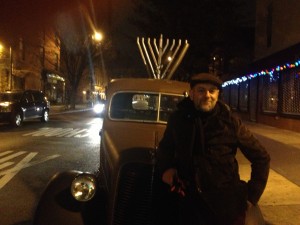 What do you do if the sacred stories that your family or your people tell to one another generation after generation turn out to be a bit more, well… complicated than you were taught as a child?Dive just beneath the latkes and dreidls and you’ll bump into some grim truths about the heroic Macabbees and their brand of freedom fighting.  In our liturgy (and religious schools) we retell the story of the few prevailing against the many, the weak over the powerful.  We talk about the battle between good and evil, those who believed in freedom and the oppressive regimes who wished only to deny it.  What doesn’t get much airtime around the Hanukkiah is the bloody civil war between Jewish assimilationists and the religious zealots willing to kill their brothers and neighbors to preserve the purity of their religious traditions.  Our heroes, it turns out, had a shadow side – which included a penchant for forced conversions and brutality that parallels the tactics of religious fundamentalist regimes in our own day.So we, like everyone with a complicated past (in other words – everyone), are left with a choice.  We can whitewash the past and come up with a narrative that focuses on the miraculous light that persists when all reason indicates it will burn out.   Or we can abandon the holiday – and the whole tradition for that matter – unwilling to be party to the blood and hypocrisy at its core.But there is a third way: we can complicate matters.  We can celebrate the heroism and shudder at the brutality. We can recognize the moral courage and the failure to manifest the values that drove the revolt in the first place.  And through this exercise, we can affirm two uncomfortable truths of the human experience:  sometimes good intentions have devastating outcomes.  And sometimes strife and cruelty give way to something magnificent.  There is hardly a birth story of any nation that doesn’t hold such complexities.

In 2001 Emory psychologists Marshall Duke and Robyn Fivush created what’s known as the “Do You Know” scale, in which they asked children questions about their family history – the pain and the privilege, the travail and the triumph.  They found a remarkable correlation between how much children know about their family’s stories and their emotional health – in particular their resilience and self-esteem.

Even still, do you really have to talk about the bitter truth hiding in the past? There are many ways to tell your story, Duke says.  There’s the ascending narrative (“We had nothing but fought hard and now we are here”) and the descending narrative (“We used to have everything and then we lost it all”).  But according to Duke’s research, it’s the oscillating narrative that builds the greatest strength and character in a person.  The oscillating narrative celebrates the victories but acknowledges the mistakes, the compromises and the struggles along the way.[1]Tonight, let’s tell the real story.  If you light with children, it’s ok to tell them what it means to live with imperfection – even with an imperfect foundation narrative.  Exercise the power of reframe – take an honest look at our painful past and rather than deny it, learn from it.  Honor the discomfort, affirm the fact that you would have made different decisions.  Tonight, complicate.  Oscillate.  Elaborate.  Don’t obfuscate.  See what we can learn – and teach – from telling the truth.R’ Sharon

[1] Check out Bruce Feiler’s the great article on Duke’s research in the NYT this past spring.