Did Einstein predict  the secret of the Cherubim?

Let’s assume it’s a cosmic coincidence that just this past week scientists announced the first observation of gravitational waves using an extremely precise instrument and the weekly Torah portion chanted in a synagogue near you described how to detect subtle signals from Beyond using a conceptually similar instrument.

This kind of assumptions and conversations happen when  a Berkeley robotics professor and a rabbi hang out in a San Francisco church on a Saturday morning with members of  a synagogue called The Kitchen. 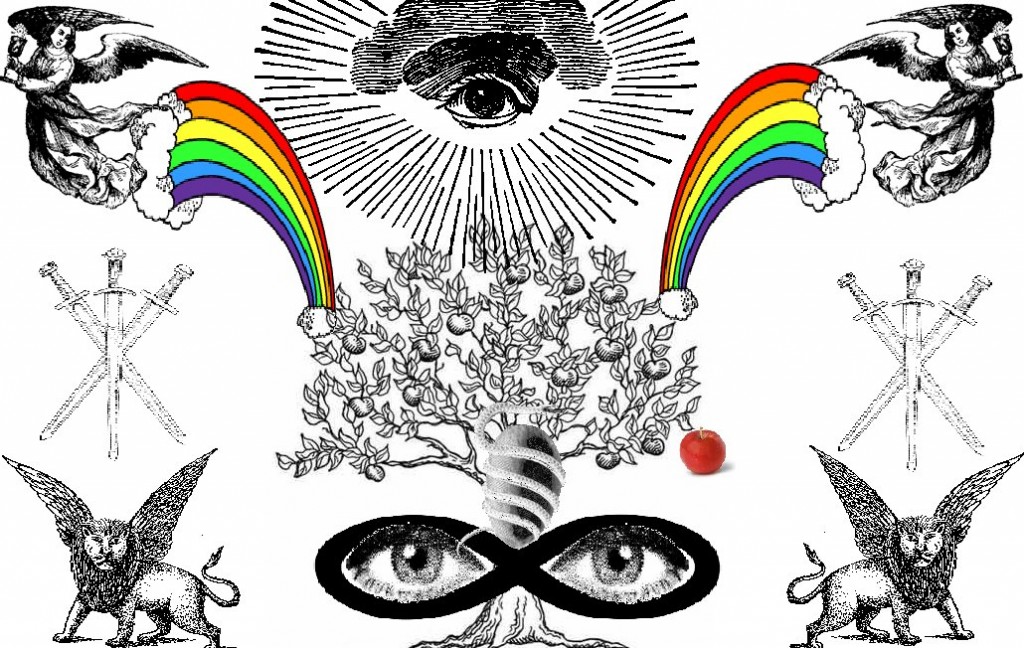 Under the stern gaze of the good samaritan in the stained glass windows, the Torah scroll unrolled to retell, storahtelling style the verses from Exodus that describe every detail of the construction of the tabernacle, that first Hebrew mobile temple that also served as God’s kitchen.  Afterward as we discussed those mysterious golden and angelic creatures poised on top of the ark of the covenant, we suddenly realized they bear a surprising resemblance to the apparatus that enabled this week’s momentous announcement of the discovery of Einstein’s gravity waves.

On Feb 11, the team behind the Laser Interferometer Gravitational-Wave Observatory (LIGO) announced a major interstellar discovery..  They were able to detect a signal from the collision of two black holes over a billion years ago. This amazing antenna took 40 years to build.  The key to its design, like the rabbit ears on your grandma’s TV, is the relationship between two elements.  In this case it’s two precision laser beams with mirrors arranged in an L shape buried in pipes 2.5 miles long.  It monitors very subtle differences between the two beams to filter out noise that gets in the way of the signals. The mirrors and laser optics have to be extremely precise, so gold is used to avoid oxidation.

In fact the  very sound of the universe was detected – coming from over a  billion light years away.

The frequency of gravity waves fall within the range of human hearing, between about thirty-five and two hundred and fifty hertz. Our ability to detect them reveals a new spectrum of signals about the universe.  Scientists noted that astronomy has always been a silent movie, but now, it’s a talkie.

Could this talkie now be talking with the hallowed ‘Speaking Scroll’?

Chapter 25 in Exodus specifies how to build the Ark of the Covenant, the size of a mini fridge, made from acacia wood, inlaid and covered with gold. It was to be the container of the sacred word itself but also a communications device.. The closest one got in the ancient world to encounter the Creator was in the space above the ark, where the gaze of those gilded guardians met. “There I shall meet with you” God instructs Moses in Ex. 25:22.

The ark has gone missing over 3000 years ago and its whereabout remains a mystery. Spielberg’s 1981  Raiders of the Lost Ark  suggested it’s in an  FBI basement while other conspiracy theories point to Ethiopia or the vatican or the belly of the Temple Mount itself. Mystical teachings claim that though the device  is long gone the message that lingers is that the divine can be accessed whenever two of us pause long enough to be present, eye to eye, for and with each other.

But what if those two cherubim are not just looking at each other but actually designed to tune into signals from beyond, from the great watchmaker herself? The two mysterious cherubim, with large outspread wings to increase reception, crafted from gold to improve transmission, and mounted precisely on each end of the device to create a perfect L-shape? Was that ark engineered to capture the vibration of the infinite connection just as Einstein would predict so many years later?

Who knows? Jacob Ben Asher, a 14th century German Jewish sage living in Spain had this to say about the secret of the Cherubim: ’And their faces shall look one to another – just like two friends engaging in words of wisdom.’

For one moment on a Saturday morning inside a church-synagogue-kitchen two friends did just that with a nod to the great Einstein who once said: “My religion consists of a humble admiration of the illimitable superior spirit who reveals himself in the slight details we are able to perceive with our frail and feeble minds.”

Amichai is the founder and spiritual leader of Lab/Shul NYC

Ken is an artist and professor of engineering at UC Berkeley.