I know there are too way many words out there already on the situation and I’ve already written a bunch, but its 1am and I’m sleepless in Jerusalem, jasmin scent under the pomegranate tree in the yard, and nonstop news still pouring in like the riots in East Jerusalem just a mile away and all international flights are now stopped – I’m supposed to fly out on Thursday – and  writing helps me  make sense of what’s going on, so here goes another recap of just fragment of my today, in Israel, at war:

This morning at the bomb shelter turned kids’ daycare in a synagogue in Asheklon, I told a group of about 25 kids ages 3-11 a story about the bravest kid in the world. I figured we  could all use a dosage of inspiration about courage – these kids having spent the last two weeks under constant sirens and mostly indoors and underground. My version of the legend of Nahshon, the Hebrew boy who leaped into the Sea of Reeds when Egyptian soldiers were about to attack the fleeing slaves focused on the choice to have trust and take a leap of faith into the unknown future. The kids held a vote whether this was a good or dumb idea, and most agreed that it was better than just sitting around and waiting and praying. Then they sat down to draw what it may have felt like to swim in the sea with Nahshon and came out with lovely versions. One of them, by an 8 year old boy included the scene in the sea (with sharks) and an inserted box containing  a very detailed sketch of the shelter we were sitting in, down to the steel door, hatch and the chair I was sitting on: “This is us looking at them and remembering”, he explained, “so that we will not be afraid.” 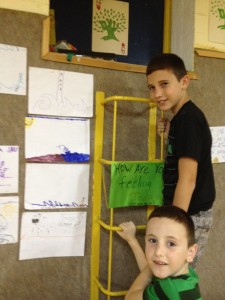 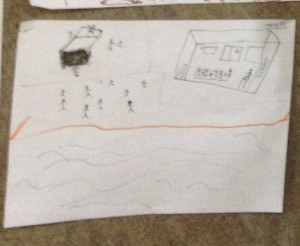 There was a siren right after that but the kids, busy with snacks deep under ground, didn’t notice. I go upstairs, outside, to smoke (it’s war, don’t judge) and meet a few other people who came from all over Israel to help out down South – taking off from work to just do what they can. They tell me that over 500 people showed up at a makeshift volunteer center in Ashkelon this morning – sent to shelters that are taking care of kids, elderly, a mental institution and domestic abuse  shelter. There is somethign to day for the spirit of crisis and unity. We don’t talk politics – we agree to not go there now – but simply pull together and do what can be done. This is the Israel and the Isarelis that I know and missed and love, despite the trauma, in spite of why this is happening, this tragic result of horrific public policy and so much abuse of what’s sacred and worthy by the higher ups.

Another siren at 2pm, just as I left the synagouge, after hugging the kids and promising to return –  to drive back to Jerusalem. I ducked into a doorway of another, empty, synagogue near by, taking the time to read the wall full of posters for religious concerts, classes and events. Fear and faith are big around here these days – not just for kids. Whatever helps? And yet, one wonders at the narratives that are woven and spoken that sometimes inspire courage and sometimes cultivate hate. It has already been noted by many here that there’s a lot of prayers, god-talk and words-in-name-higher-power thrown around by all sides of this war all over the place – perhaps more than in the past. earlier today I read that Rabbi Dov Lior – a known fanatic racist religious leader paid for his post by the government just released a ruling based on his reading of Jewish Law that allows for the killing of civilians in Gaza. All civilians. He is a minority opinion though not alone and this is not the first time he exposes such views that sadly can be found in our books and history. I expect the backlash will follow soon – I hope by senior rabbinic voices not just from the fringe. I hope he is arrested.

Back in the car I turn on the radio. A popular talk show host invited listeners to share what’s on their hearts.  He opens up with a prayer – Oseh Shalom – with a twist – May the One who makes peace above – make peace for us – and for the whole world.

The first caller objects to this version of the prayer: The original prayer is just for Israel – not the whole world. Is this the time to think of others? Interesting, I think, but the man gets disconnected mid-sentence and the host tried to get him back on air, only to explain – he’s calling from the South and there’s another siren.

Then there’s this woman from Haifa, voice choked with tears, who says that she moved here from Argentina three weeks before the Yom Kippur war and is now diagnosed with Post Traumatic Stress, and is worried for her kids and grandkids and laments her moving here even though this is home, and how she has an Arab boyfriend, both of them divorced, not religious, and they just want to walk down the street and hold hands. And they can’t. And they don’t want to leave their homeland either.

And the young mother of three who just gave birth to the third, a boy, two weeks ago, and his father went off to reserve duty right from the hospital, and she hasn’t heard from him in four days, and, she is not religious but she was told to chant out loud Psalm 20 – which she does on air:

“May God answer you on days of trouble.. some are fallen, yet we rise…”

And by then I have to stop the car by the side of the road because I’m sobbing so damm hard it’s impossible to focus. And I’m aware that by stopping I’ll confuse the other drivers who may think it’s a siren – we are supposed to stop the cars safely on the side of the road if we hear a siren and lay down on the ground with hands on our heads if there is no cover nearby- so I get out of the car and lean on it pretending to be talking on my phone so that nobody thinks its a siren. And I turn my head from the traffic so that I can cry in private, and in peace, phone to my ears, whole body shaking.

My1~ phone vibrates with the message from Shirley that a friend of her son’s is among this morning’s wounded soldiers, and another from a friend about Max Steinberg, a young American who came here to join the IDF and died today, and then another post from Saeed with the name and photo of a mother of four who died with all her kids in the same neighborhood in Gaza as Max.

I finally get back into the car and keep on driving, slowly, radio off, and think about what the man asked on the radio and how he wanted us to only pray for peace for Israel right now, and how I understand him, deeply, but know that this is not my way. Not any more. And I know that I am not alone. It’s isn’t either/or, not anymore. It simply can’t be. It’s got to be and/both. We can’t keep on this way.

I refuse to keep two death tolls lists. The list grows longer by the hour and it isn’t about ours and theirs. As of this evening there are 612 dead. Our casulaties. Our dead.

I’ll be honest. The deaths of Israeli soldiers and civilians is closer to home. The radio I listen to is Israeli and the songs that tear my heart apart these days -and most days – are Hebrew songs – the ones that I grew up on, that speak to my soul.

But these two stories are part of the same book.

The grief I feel transcends all that – though this is not how I grew up. I have been taught, and trained, in recent years, by radical rabbis and shamans and sheikhs and lamas who are nothing like Dov Lior (do I even call him rabbi?) to stretch my mind and heart and ability to go beyond  familiar borders and I don’t care if this makes me a lefty or a softie or a naive dreamer or a fool that refuses to believe that evil is real and enemies are there to get me as they do right now. They do. It’s true. I know it, and my family’s Holocaust scars are there to prove it. And yes, it’s a stretch to mourn the death of a Hamas operator who targets me and my family knowing full well that any rocket or tunnel can lead to my blood. I may not mourn the death of my enemy with the sorrow reserved for my brothers but I will pause to bow my head and add him to the growing list of the dead. Our dead.

I don’t know the name and biography of every single one of the people who died in this recent round of battle. Right now, it’s all a blur.

From God’s point of view, if there is such a thing as a God or a celestial point of view that cares enough to take it in, it’s all one big pile of bodies and rubble. It’s a blur. Isn’t that the famous story about the Crossing of the Sea of Reeds? The angels want to sing with Nahson, Miriam, Moses, and the Hebrews who are finally free, but God looks down at the drowned Egyptians and prevents angelic singing – ‘they are also my children’ claims this version of a compassionate God, “only mortals get to sing now – angels don’t.”

The point of that rabbinic story is, of course, that humans need to sometimes celebrate triumph over enemies and only angelic perspective transcends the divides.

We are no angels.  Our virtues fall short on so many honest human fragile faults. But can we try to stretch our compassion beyond our usual default of loyal and territorial, extend the care so that we can be not just part of the problem but part of the so badly needed solution to this continued game of blame?

Get real, they tell me, rolling their eyes. This country is awash with hatred and you want to cry for terrorists and their kids?

I don’t know what I want exactly. But I know what I don’t want. And as I keep on driving to Jerusalem the sobs keep coming, but it’s a much faster highway and I can’t   stop on the side of the road. Everyone is driving furious and fast. The radio, back on, is playing REM’s ‘Everybody Hurts‘ and it’s too weird and actually funny because I remember the video clip where everybody just leaves their cars on the highway and walk away.

I wish we could. But we can’t.

So hold on, Mike Stipe sings.