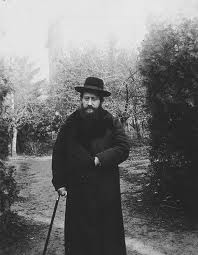 On the 11th of Heshvan, 1942, my grandfather, Rabbi Moshe Chayim Lau, led his congregation to the gas chambers of Treblinka. We are told he was clasping a Torah scroll, and chanted the kaddish as he, along with one of his four sons and thousands of Piotrkow’s Jews marched to their deaths.
I called my father today, 69 years later, to let him know I remember, thinking of him. My father was one of the other three sons who survived. My grandfather’s last words of legacy to my father were: make sure the rabbinic dynasty survives. So he did: My father made sure that his younger brother live on. That younger brother became the chief rabbi of Israel, his sons became rabbis, and so did my brother. And now it’s my turn. On my way to Rabbinical School at JTS this morning, after talking with my father in Jerusalem I imagined my grandfather’s last moments, horrified, again, and inspired, again by his leadership at the unspeakable time of crisis.

He lost his left arm in a train accident in the early 1930’s, and trained himself to put on Tefillin on his remaining right hand. Had he had both hands – would he have had a better chance at survival? He was only 50 years old – 8 years older than I am now.

And then, unexpected, I lifted up his memory inside the James Chapel at the Union Theological Seminary – across the street from JTS. Union is a Christian seminary, liberal and interesting, with several faculty members teaching at both seminaries and shared programs in the healthy spirit of interfaith. I’ve taught and participated at programs at Union before, even sat at their Succah, but today I attended a creative religious service, where students and faculty sat together to eat, pray, talk and share what’s on their hearts. A few of us from JTS, noticeable with our kippot, wanted to learn these forms of worship and meet our neighbors. We were warmly welcomed, breaking fresh baked bread and slices of apple with our friends from across the street. One of the pastors spoke briefly about a colleague of his in Syria, his struggles and hopes. He invited us to talk in small groups around the round tables about the role of hope and despair in our lives.

I spoke about my grandfather, his final moments on this very day, his moments of final hopelessness. Was there consolation in this complete despair? submission? acceptance? Can I, any of us, in our small moments of despair learn anything from his choices and fate? I ‘lifted him up’ as I was taught to say by my new friends at Union, honoring his memory, pain, legacy, sacred journey.

In a Christian chapel, along with fellow clergy students of at least two faiths, I prayed for my grandfather’s soul finding peace. I prayed, quietly, for more hope, for all of us, always.

The worship at the chapel ended with an upbeat hymn: I will walk in the presence of the Lord, in the land of the living. I recognized the words from the psalms.

And tonight, on another calendar, Nov 9, a reminder of Kristalnacht, a night of hatred when the horror began with the smashing of windows and lives.

We walk in the land of the living, we get to lift each other up, strive for better.

I hope my grandfather, of blessed memory, would have approved of my prayer. I think so.