May 14 2018 is far from over and already it is an epic day of historical big news and bad blood, a blight upon our highest human aspirations, dreams and hopes, no matter what side of the political divide one’s on, and who and why you blame, this day is already destroying many hundreds families, futures and hearts.

Who knows what it will be by tonight, by tomorrow, 70 years from now.

This is also a day of profound celebration, an anniversary of ancient dreams of homecoming come true. We live multiple narratives, these days more than ever, and on some days like today they confound us all at once, deeply challenging tribal, familial, human loyalties.

The only way I can try to make sense of it all, as the numbers of dead on the Gaza border rise terribly each minute while the American and Israeli flags are flapping proudly in the Jerusalem air and the flight I’m on from Warsaw is landing in NYC is to reflect as I take a look to the past, pause in the present, plead and plan ahead for a much better future.

A lot of it is in our hands. And hearts. Yes, thoughts and prayers, but more than that – intentions, reality check, commitment to what’s waiting ahead for the sake of all our future generation that deserve a better life.

This post is personal, it’s raw and rough, one among many written on these days of many meanings – Jerusalem Day yesterday and Nakba Day tomorrow, The American Embassy’s move to Jerusalem and the start of Ramadan, Israeli’s win in the Eurovision on the eve of it’s 70th birthday. I just completed a complex pilgrimage in Poland in the footsteps of my ancestors and the shadow of Shoah. We each bring our own personal perspectives and narratives to what sometimes become public domains built on intimate joys and pains, often beyond words, bearing the many faces of truth.

I write and share this with the hopes of peace over truth, of more love than fear — of less blood and rage — if not today then in the future. I write this as a way to tell my friends and siblings, congregants and self that this day matters much but so will what we do with it on every day that comes next.

Jerusalem has many faces. One of them is a long street in the middle of Poland, in a city called Piotrków Trybunalski. This, for me and for my family, is a lot about the past. Others live and love there still.

My father’s last address in Piotrkow was on 12 Jerusalem Street, then at the heart of the Ghetto, 1942. The Grand Synagogue where his father served as the town’s last rabbi was just down the same street, and is now serving as a public library. This past Friday I was honored to be back there, leading a a group of Jewish travelers, meeting with a group of curious and bright Polish High School students who wanted to know more about the history of this magnificent building and community, including the bullet holes over the wall-art that once towered above the Torah ark, facing Jerusalem. A young man spoke passionately to us about the future of Polish-Jewish relations, about how all people can and should learn from the atrocities committed here to do more to get along. When our group went off to lunch I walked along Jerusalem street by my self, retracing the last steps of my family, church bells ringing and flowers blooming and life lived on. I stood on the spot where the deportaions happened, telling my grandfather, as he stood there holding a sacred scroll on his last day alive, that he is not forgotten, nor the Torah he held on to and taught till hus last gassed breath. The most important verse in the scrolls that once lived here, I told the Polish students, was to Love everybody as you love yourself. As we continue to try. 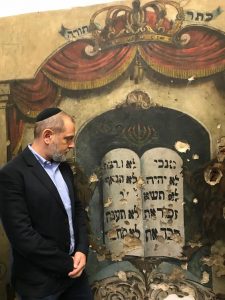 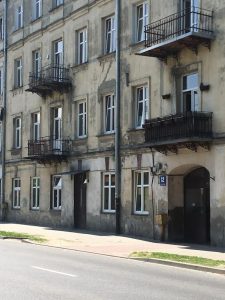 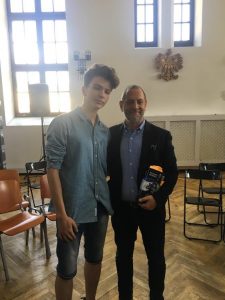 Yesterday and today in Jerusalem, where my father is buried and my mother still lives, where their great grandchildren play in the parks and where I grew up and was sworn in as a solider to defend my country, many celebrate the city’s 1967 unification of East and West while many others wait, wail, watch, wonder what the future has in store for them and for all. This ancient city of successive rulers has known walls, flags and battles and festive rituals before and she will do so again. Today is another historical marker in a long list.

I celebrate the amazing miracle that my father could not have dreamed of during those days in the Ghetto on Jerusalem Street. He who survived, was blessed to be in Tel Aviv on this day in 1948 to witness the birth of the state he helped build from dream to reality. And I dream with so many that one day, all of us who have known suffering and persecution, walls of partitions and separation, will rise above the dreams and nightmares, all our victimized furious fears to truly make the Holy Land and Jerusalem the Land and City of Peace for all who love this ancient multi layered home.

Today, just now, the US embassy was opened in Jerusalem, a controversial act, and a done deal. I celebrate Jerusalem’s status as Israel’s capital and revel at Israel’s many levels of success. but I am not excited about this embassy and how and who got it to finally open, in defiance of so many other factors and reasons to lean in harder for a better solution for all. Not like this, not without full context and compassion, not as this move is led by malicious leaders I and many did not vote for and do not have faith in, even as I have respect for the office they occupy and the democratic process that got them there. I shudder to think that a hateful, racist, anti Muslim and homophobic man like Pastor Jeffress offered a prayer at the ceremony on behalf of the American President. Many faith leaders have risen to protest this, but in the present climate, might passes for right and any rebuke is shut down in the name of history written by winners.
I’m sad to learn that Ambassador Dan Shapiro, whose compelling article from this past wknd celebrates the embassy’s move was not invited to the event- petty, spiteful political stuff.

But none of that compares to the rise of numbers of the wounded and dead in Gaza today, protesting an occupation whose time has long come.

You can blame Hamas all you want but there has to a be terribly real reasons for thousands of young people to fight for their right to live as free people in the face of the prison that Israel continues to insist on with no hope in sight. That reason is despair, the direct result of one sided gestures and promises like the one made today.

My last site of visit in Poland, just yesterday, was the Warsaw Ghetto, were all that’s left are several buildings by the decoration square and the bunker where some desperate and brave young people fought to their death, if only to go down in history as going down with a fight.

There is no direct historical comparison and no moral equivalent but there’s there’s chilling reminder that when there’s nothing to live for young people will rise in the face of power, and will risk, and will die, becoming martyrs in a human tragedy that keeps on bleeding on.

A Jewish legend tells of two men who have a conversation, one of them is old and planting a fruit tree, the other is curious why bother planting a tree that will not yield fruit within your lifetime. My father planted trees for me, explained, the elder, and I am planting for my children. The other man then falls asleep for seventy years, awakens to find that sapling grown, that old man dead, and a new generation enjoying the fruits of the previous people’s labors. 70 years ago our parents planted seeds and trees, built homes and outlines borders. What will we leave for our future planters 70 years from now?

I will not be here in another 70 years, nor many of us. But maybe Jerusalem will, whatever name she’ll go by. And maybe Gaza. And trees will give fruit and shade and beauty, olive and fig and wisdom and life, and maybe by then this conflict will somehow be less about mine vs. yours but somehow about ours. 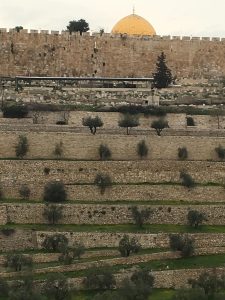 But today is a day to pause, to honor all losses on the path to homelands, and to mourn each broken heart and home and loss and all the ones yet to come in the days ahead, may they be much less bloody.

May somehow we wake up to what the most important verse in our Torah and in so many sacred scriptures insist and struggle to survive and triumph in our badly wounded hearts. May Ramadan bring prayers and hopes to all people, and may the holiday of Shavuot and Pentecost reveal the truths again to all who listen – deep inside our hurts we need, we want, we live to transcend our fears and rise again to love. It’s in our hands and our hearts. 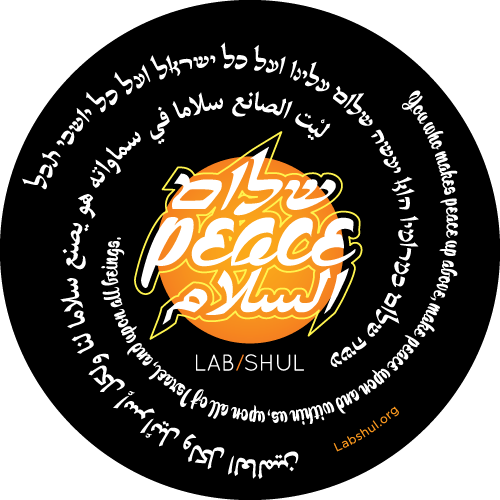