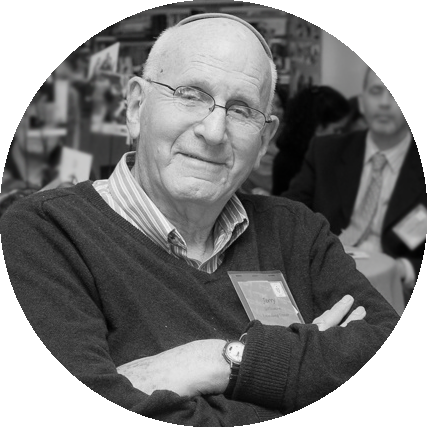 Jerome William Gottesman passed away on Sunday September 10th, 88 years old. He was a wise and successful businessman, a devoted family man, and a generous philanthropic leader.

He was Grandpa Jerry for my kids and their many cousins. I knew him, fondly, as Jerry.

He leaves behind many mourners, including his wife Paula, his daughters, their families and many grandchildren, as well as countless relatives, friends, employees, and fans.

Together with Paula he came for Lab/Shul Shabbat events over the years, joined us via livestream last Yom Kippur, attended my ordination gala, supported us generously, and often engaged with me with ideas for doing things better for the rest of the Jewish community – and beyond. Our first big conversation was over the Torah scroll. Jerry didn’t speak Hebrew well and though he liked how we translated the Torah verse by verse into English, suggested to pay for a Torah scroll written entirely and exclusively in English but that was otherwise in accordance to all Torah scroll writing laws. THAT was a fascinating and fun conversation. I realized that when Jerry has a vision, he was serious in connecting the dots and getting all the details right. When he realized that this was not the desired direction he immediately dropped it and asked me, “OK then, so what else can we do to make this work for more people?” I realized I had gotten a glimpse at what made him the big business leader that he was.

I’ll miss his wry, dry sense of humor, the glint in his eye when he got interested in the conversation and perked up.
He will be dearly missed by all but his legacy of turning opportunities into vehicles for success and change will live on. On the day of his death, our kids Alice, Ezra, and Charlotte, along with their friends, set up a lemonade booth outside their home and dedicated the $13 they raised as a contribution in his memory to the Gottesman RTW Academy – the Jewish Day School he and Paula helped to found in New Jersey. I’d imagine his soul got a kick of that.

May his memory be a blessing for all of us who knew and loved him, and to the many who benefited from a life lived largely and generously.

On behalf of the Lab/Shul community I send our deepest condolences to all his family members and friends.

Let this year and its challenging news end softly, and let a year of good news emerge.

The funeral will be held at 1:30PM on Tuesday, September 12 at The Gottesman RTW Academy in Randolph, NJ.

The burial will follow at B’nai Abraham Memorial Park in Union, NJ.

At the home of Paula and Jerry Gottesman, 7 Quaker Ridge Road in Morristown, NJ

At the home of Sally Gottesman, 333 West 88th Street