“Ladies and Gentlemen, there are moments in the life of nations and peoples when it is incumbent on those known for their wisdom and clarity of vision to overlook the past, with all its complexities and weighing memories, in a bold drive towards new horizons.” (Anwar Sadat, 1977) 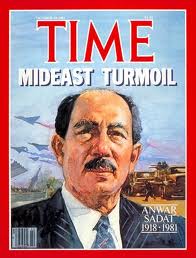 On Nov. 19 1977, Egypt’s President Anwar Sadat came to Jerusalem. I watched it on B&W TV at home, along with the rest of my ecstatic family. Only one or two years earlier, at Bnai Akiva -youth movement bonfires we’d burn his effigy along with those of other Arab leaders like Hussein and Arafat – evil enemies of our people. But here he was, and there changed history. A few years later Sadat paid for his belief in peace with life – like so many in this region bold enough to try and tell a different story that does not end up with rage.

On this Nov. 19 another Egyptian president is talking with Israelis about peace or at least about a cease fire. All and nothing is the same as it was back in 77. And still the stubborn hope that the one who one day is bitter foe becomes if not your friend at least a neighbor. Hamas and Israel are just two names for millions of people trapped in a cycle of eye for an eye that is leaving us all blind, with blind spots blocking the visions that Sadat and Begin and Rabin and so many others dared to see.

This Nov. 19 we’re counting the dead, dreading the ground invasion, comforting the crying, praying like crazy, to whoever is in charge, for the hearts to soften and the pride and hate to take second seat to reason and for diplomacy and strategy and words to silence the rockets and the bombs. What other strategy is there? What use will more and more of retaliation bring?? Can we not pause long enough to hold both sides as equally wounded victims never mind who started first? Can just one second of compassion help press pause on this fatal auto pilot us-vs-them???

As an Israeli, a parent, a son, a believer in the sacred dignity of faith and religions all, a former IDF solider, a fighter for peace, a student of Arabic, and of Talmud, a tired and terrified man I plead for just one moment of pausing the endless finger pointing and hateful updates that glorify violence and gloat and blame. Enough with being part of the problem – we need to be the solution. Pause to remember that we breath the same air, just inches apart across borders that do not go down more than ten feet into the ground.

On Nov. 19 just two years ago our third daughter was born. Happy about cupcakes in NYC today, Charlotte Hallel is, gratefully, far away from the two year old children killed this morning in Gaza or hiding for days on end in shelters in Ashdod.

What can I do to not have her and her siblings and so many others grow up into this blind version of the world? This either/or solution?

Today I simply pause, between news updates and worried check-in’s with relatives and friends who’ve been called up or sitting in shelters and the one person I know still living in Gaza –  to honor Sadat’s courage. To say yes to change, to all people’s right to live in dignity and peace, and yes to self defense but no to the malice, no to the gloating, no to the demonizing and other’ing of others who were and are and will be brothers and whose hate hurts more but love will heal so much more still. I know, it’s fruity, leftie, rainbow talk in the middle of the pillar of smoke but it’s all I got. This hope that we can remember to hold both sides at once and not be seduced by the primitive voices of blaming. Be part of the solution. Not add fuel to the flames of the problems. I de-friended at least a dozen people on FB today – for hatred and and the type of knee jerk nationalistic zeal that is just too toxic. doesn’t help.

Nov. 19. Happy birthday little girl, thank you Mr. president. I pause to pray, for just one minute, for the holding of all polar opposites in one hurting heart that hopes for happier decades with full faith that it can, and will, be done.  Inshallah, כן יהי רצון

One thought to “Nov.19. Thank you Mr. Sadat for the reminder.”