When the sun rose over Jerusalem four years ago I sobbed for joy because of the poetic justice of a black man’s triumph. I remember driving on streets named for American icons whose work had led to that triumph—Lincoln Street, then Martin Luther King Rd—as the early morning November fogs lifted, feeling full of praise for Barack Obama’s first presidential victory. 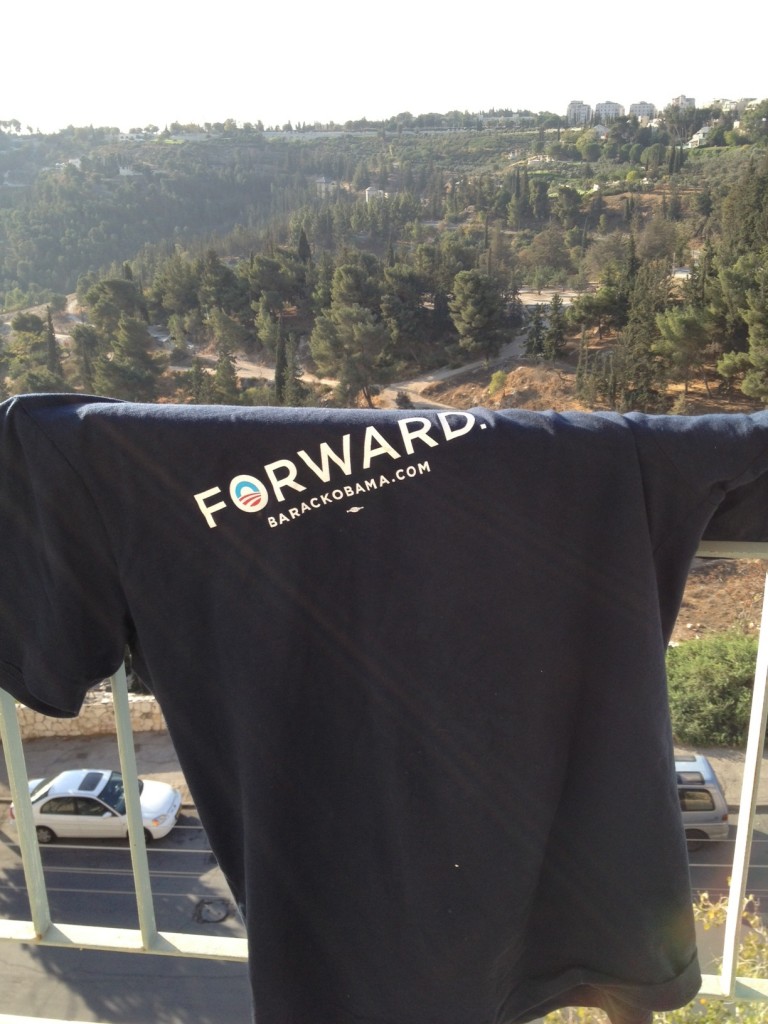 This morning, with the first rays of light, here I was again, as church bells rang out over Zion, driving to the sacred sites in the Old City and crying, this time because of a lesbian’s triumph—Tammy Baldwin, the first openly gay woman elected to the US Senate—and because here I was, a gay Jewish man praying hard for four more years of honest human dignity for all. The news of Obama’s re-election broke minutes later.

So much has changed since that hopeful morning in 2008. Back then, Binyamin “Bibi” Netanyahu was not yet Israel’s prime minister. The American billionaire Sheldon Adelson was not the owner of Israel’s most popular daily paper, Israel Hayom, a pro-Bibi organ which—thanks to its owner’s deep pockets—is free, and has undercut and undermined the rest of Israel’s print media. The cafes in the German Colony neighborhood were open all night with giant screens and viewing parties. When the news broke, just before dawn, champagne bottles popped open, people were yelling in the streets, and I wasn’t the only one crying with relief. At the American ambassador’s official breakfast at the King David Hotel, strangers hugged. I took home a historic souvenir—an Obama campaign sign with that famous “Hope” logo. There was so much of that then.

Some of it is back today. But last night the German Colony cafes were closed. Israelis—worried about our own upcoming elections that Bibi seems likely to win, fatigued by our internal politics, jaded by the lack of progress with peace and by the prevailing sense, true or not, that Obama hasn’t done enough—just don’t seem to care as much. Americans held house parties through the night, tweets and texts crossing oceans, but the 2008 excitement and follow-up euphoria seemed way more subdued. At 6:17am, the sun just up, I took a picture of the morning sky, cheered with friends on Facebook, then quickly dressed to drive to the ambassadors’ breakfast, yet again, waving on my way to Jerusalem’s ancient walls, which have witnessed so many leaders come and go.

Never mind the silent walls. I drive and cry because this morning it’s about Tammy Baldwin! Elizabeth Warren! and Obama’s second term! I cry knowing that the man who fought for my right to marry a man will care more for the rights of all. I pray—sincerely—to who or whatever is in charge of the winds of history that in this second term he’ll rise up to the challenge of peace in this region, not take no for an answer, and give it all he’s got. The dignity of the Palestinian people and the security of Israel is more at stake then ever.

Four years ago on this day, our oldest daughter, Alice turned two. From Jerusalem I sent her a deliriously happy birthday video. Today, she’s six and proudly wears an Obama T-shirt that says “Forward”. I am hopeful that like so many other children she will go through the first year of elementary school in a country quite divided but heading forward to more days of blazing dawns and hopes for changes, and dignity, and courage. Happy birthday, Alice. And happy new day, Mr. President.