amichaiMay 28, 2014Season-Specific, writingsComments are off for this post
Paratroopers, Pope & Hope: Pausing to pray for Jerusalem
Amichai Lau-Lavie
Jerusalem Day –  which falls this year on May 27, was designated by Israel to mark its reunification of Jerusalem in 1967. It’s a day of celebration for many and of reflection for many others. I used to be among the celebrants, marching up to the Western Wall early in the morning, along with other Yeshiva boys in white shirts. These days – I pause to praise the privilege, honor the dream, and reflect on the greater vision  of real peace.
This year, an added note of thanks to the Pope for three important reminders.
The iconic image of that historical moment in ’67 is that of the paratroopers at the Western Wall. 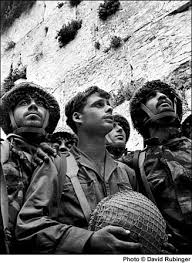 This week, on the outskirts of Jerusalem, at yet another famous wall, another image is going viral and possibly iconic:  Pope Francis praying at the Separation Wall between Israel and Palestine.
Two walls, two photos, one more chance? So many stories.

When I was 14 years old, living in Manhattan, I hung up the photo of the paratroopers at the Wall on my own wall,  over my bed. I was religious, Zionist, homesick for Israel, and who knows, they were handsome and I was just beginning to come out.

4 years later I too joined the paratroopers, wanting to prove that I’m a man, get that red beret, be a hero, defend my country.
The paratroopers swearing-in ceremony was at the  Wall. Along with my brothers in arms I vowed to die for our ancestral land. We all received an IDF issue Bible.
That night I took a sharpie and added a mystical incantation to my gun strap- ‘All for the holy glory of God.’
Then the first intifada started. Our  platoon was sent to keep a  curfew in a Palestinian village.
This is not, never was, never will be, black or white, and there are at least two sides to each conflict – I know now more than I knew back then – but the experiences during those first few weeks of the intifada shattered many of my views, beliefs and convictions.  I began doubting: Was the vision of a Greater Israel that I grew up to believe in worth this terrible price of attrition to our sense of worth, compassion, justice?
One night, back home on leave, I heard Amos Oz speak on TV. We have dreams, he said, big dreams about a big land as always promised to our parents. It’s a good dream. But we are not the only ones dreaming here. The Arabs dream big too. And somehow we all have to wake up and make a compromise. This land can not contain the dreams. It needs us to wake up. Something like that. He quoted the verse from psalms that I knew so well from the prayer after meals, echoing the desire to return to Zion, to come home: ” We were like dreamers“.
25 years later, so many big dreams and rude awakenings later, I, along with so many of us, still struggle to make sense of the ways with which to make peace possible. And not just between Palestine and Israel. I try to reconcile  the dreams I was raised to believe in with  the realities that challenge us to wake up to what’s at stake, and wake us up to our role in co-creating a better reality.
I’ve been on the line between Jerusalem and New York for the last 15 years, living and loving in both places, privileged to have this often complicated dual perspective. When in Jerusalem I don’t visit the Western Wall often. It’s too loaded for me. In recent years I got more involved with  Women of the Wall‘s brave movement to make the Wall – and the Israeli public sphere – more welcoming to all of us. I’m glad for the progress in making – but the Western Wall is not where my hearts yearns to pray Too many human walls of conflict have grown up along this ancient sacred fence. The faith that guided that 18 year old paratrooper has in some ways deepened, and in other ways faded. 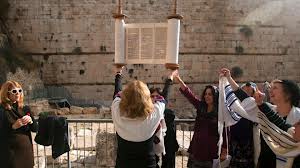 I’m trying, still trying, to come from love, and to make sense of letting all narratives be heard and honored so that progress can be made, together. I try to keep learning more and come from knowledge, not just feelings. I try meeting with people from all sides of this story, hearing all versions, respecting the differences, looking beyond them when possible. But there are so many walls.
This book really helped me make some sense of the bigger story: Yossi Klein Halevi’s page-turner   Like Dreamers.  On the cover is that photo I hung on my wall all those years ago. The book is the story of the paratroopers who were there in 1967 –  ‘reunited Jerusalem and divided a nation’.  I  finished reading it and posted a note  a few week ago. I keep thinking and talking about this book. 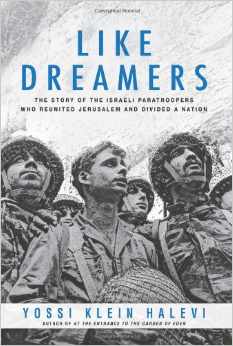 Klein Halevi followed the lives of six of these men, representing right and left, religious and secular, business and art, settlements and kibbutzim. Their stories are the story of my homeland, in many ways, my story. Yet he spins the bigger story  – human hope and despair and betrayal and second chances – not just as Israelis, or paratroopers – but just as people, with different dreams, shared hope, and a few decades worth of  perspective on the pursuit and price of dreams.
I read it in Jerusalem, and in NY and on flights in between, on the fence between wanting to give up and refusing to have faith in the possibility of noble co-existence on the road to real peace.  Another great book I read this year is Jerusalem, the Biography by Simon Sebag Montefiore – an epic journey that tells in rich detail how and why Jerusalem became so sacred for so many pilgrims and builders- and why all those narratives matter equally – together. That’s the only way to make it work.
This week, another pilgrim, Pope Francis, reminded the world about the role of religious leaders as builders of bridges, not walls. And he reminded us to pause, and to pray, and to believe that we can help make change.
He paused and prayed,  silently, for several minutes, hand on a wall on which was spray painted: “Pope we need some 1 to speak about justice Bethlehem look like Warsaw ghetto.” 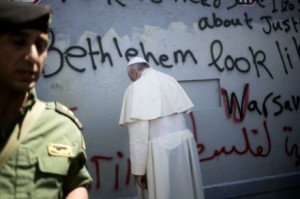 During his brief visit he paused to pray at national and sacred sites to all religions – including the Western Wall, Yad Vashem and the Monument to Terror Victims. But,  political manipulation or  spontaneous gesture, his prayer at that wall is what will be remembered. A powerful, almost prophetic icon of terrible despair – and incredible hope.
The Pope’s invitation to the Israeli and Palestinian presidents to come pray with him in Rome for peace is an extension of that prayer moment. Political and/or Religious –  he reminds us to blur those walls and labels as well, and wake up, together, to the bigger shared dream that transcends religions and nations and lands. Powerful and simple reminders. The gift of a pilgrim who comes with truth to honor the sacred.

On this Jerusalem Day, in gratitude and honor to all who love, live in and for Jerusalem and her many names, all who suffered and suffer on her walls, and all dreamers whose hands and hearts reach out for her real peace: I pause to whistle and pray another psalm:
Yehi Shalom : “Let there be peace within you, serenity in all your homes.”