amichaiJune 26, 2014Articles & Essays, general, other, writingsComments are off for this post
This week I both denied and then embraced being part of the reform movement.

On Tuesday I was giving a lecture in Tel Aviv and introduced  to the audience (500 or so mostly secular Israelis) as a “Reform Rabbi”. When taking the podium, about to talk about Ezra the Scribe and his 2,500 year old religion  revolution, I joked about that term ‘reform’ being generic for ‘non-orthodox’ and corrected – I am being ordained at a Conservative Institute because I strongly believe in the philosophy and historical-positive approach, consider myself non-denominational or Polydox, and am leading an ‘everybody friendly’ congregation that is still figuring it out. The nuance went over most heads of those present. But anyway. 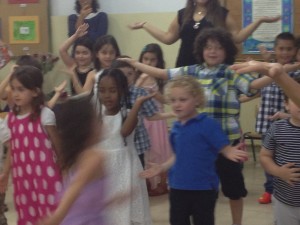 Today I was proud to be associated with and part of Reform Judaism.
Ezra, 5 years old, graduated Kindergarten in Jerusalem’s Beit Shmuel, the Reform Movement’s Campus. It’s a great gan. For the past six months I’ve dropped him off and picked him up, chatting with the teachers and some parents and followed up with him on lessons learned and songs he liked to repeat. He made good friends who are Israeli natives or came here from Ethiopia, Argentina, USA. His Hebrew skills improved a lot.
The graduation lasted as long as university ceremonies do and I was in tears through most of it. Not just because here was this amazing kid growing under my eyes, and not just because my mother, his savta Joan, sat next to me, while his Mommy and Ima were there beaming and taking lots of pictures and videos – surrounded by so many thrilled  parents, grandparents and siblings.
Mostly because the entire focus of the celebration was about diversity, tolerance and pluralism. The kids marched in with flags of the whole world, singing a Naomi Shemer song about the different blessings and countries – a song I knew as a kid and can now share with Ezra. The other songs were about ‘the other’, a dance explicitly focused on ‘black and white and other colors’ called out racism in a real way. Ezra and his dance partner, Ethiopian born Hadassah, gave each other big hugs at the end of the number. 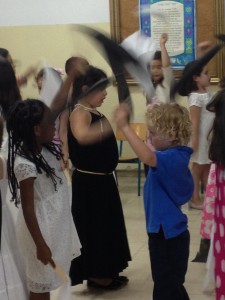 (BTW: When the ceremony was over, one of the teachers said to me – ‘just before it started, Ezra turned to Hadassah and said to her, in Hebrew – now we have to be serious, this is FOR REAL.” A stage hound! and yes, the re-emergence of Hadassah in surprising ways did not escape my mythic imagination either, dear readers with historical context..)
One of the skits that the kids put together was about black sheep and pink sheep in the herd – and how they started off suspicious of ‘other’ but then got around to celebrating differences.
Etc.
They ended with a prayer, many hand gestures and amens, to a playback recording ( a common feature, whatever happened to live musicians?) , that had us all standing and praying along – for patience, for love, schmaltzy and beautiful.
OK. I’m a gushing abba, but I’m a proud pluralistic Jew – seeing, hands on, educational values walked and talked in compelling ways that don’t highlight a triumphalist, separatist, nationalistic Jewishness that shuns out the other. It wasn’t about God, and it wasn’t about individual kids being coddled either – it was about the power of We. the greater all inclusive We.
I wish there more ‘others’ for him to play and dance with – not just other Jews. But that, too, will happen with time – in NYC and back here.
At the end of the day, for me, labels don’t matter. There are wonderful schools and teachers and truths across denominations and multiple affiliations these days run the gamut. But this week I AM proud to be associated with Reform Judaism – If only as a doting abba and a fan of a good school system when I see one.
Unlike my dear friend Neshama Carlebach I’m not coming out with a press statement, but like her, and like so many of my teachers and peers, including a revered mentor, teacher and role model Rabbi Rick Jacobs – I am honored to stand along Reform leaders, teachers, parents and children who bring out the best in a Judaism that honors all voices, genders, choices and expressions with an equal measure of seriousness and silly joy.
Mazal Tov Ezra!  Thank you Beit-Shmuel and your fantastic teachers.
Stay tuned for parental observations from Camp Ramah.
Shabbat Shalom.