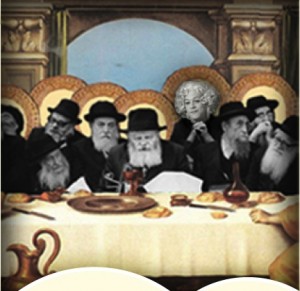 Purim week is upon us and for the Conservative Movement worldwide it’s a big wig week of Gay Pride and possibly an end to one more form of discrimination against GLBT Jews in Israel.
On Purim Night, March 7, the official chanting of the Esther Scroll at NYC’s Jewish Theological Seminary will be presided over by Rebbetzin Hadassah Gross, who, if I may say so myself, embodies radical gay activism that delighted in turning reality upside down and doing what court jesters do best: tell the truth in shining colors. I’m proud and thrilled to be part of this fabulous ritual, bringing the power of parody as sacred foolery to the esteemed, century old bastion of Conservative Jewry. A long way for Hadassah from Downtown disco to Uptown Seminary. Details are here – Rebbetzin Hadassah Gross Purim 2012 she’d love to see you and enjoy your support! It will be a fantastic night.
But the BIG GAY NEWS  may be coming out of Zion this week. This coming Sunday, March 4, a historic event will be held at the Schechter Institute, the Conservative  Rabbinic Seminary in Jerusalem. In 2006, a new policy passed by the movement opened the doors to LGBT rabbis. The seminaries in NY and LA approved the policy, but Jerusalem has not done so yet. Many of us have been involved in all sorts of actions and conversation in the last few years to reverse this discrimination and to enable LGBT Israelis – self included – to become Conservative rabbis in Israel.  The event this coming Sunday, open to the public, will feature a presentation of the responsa delivered in 2006 by the Movement’s leading rabbis, and a discussion about their various attitudes, then and now. Following the discussion, a private meeting of a committee appointed to examine this policy will take place. The outcomes are unknown but from various sources – the outcome looks promising for all those who want to end the prejudice and open the doors wide to progress and human dignity in Israel – and everywhere. The decision, whatever it will be, is a statement not only of public policy but also of a liberal attitude that recognizes the ability of Jewish Law to adjust to new social realities.
JTS Rabbinical students are expected to spend the second year of studies at the Schecther Institute. I am currently a first year student and was appalled, to say the least, by this policy. Along with great allies and the majority of my fantastic classmates I have protested this policy persistently and have worked hard to get to where we are now – a public, respectful conversation, and an actual vote. I am proud to be part of a caring community and a movement that takes this process seriously, even if sometimes too slowly. Important change takes time and it’s great to be part of the turning of tides. So grateful to the many who are ardent fighters for freedom and dignity, publicly and privately and fearlessly.
Show your support: The pubic event at the Schechter Institute is from 3-5:30pm, address here:
schechter institute

Will this be the week of Purim’s dictum – V’nahfoch Hu – Turning Things Upside Down? Here’s praying.

Shavua Tov! Wishing us all a good week of real joy, great news and grand glamour.

One thought to “Purim, Pride & End to Prejudice?”