amichaiOctober 31, 2012WORDComments are off for this post
WORD: A Word a Week from the World’s Best Seller. Follow the Annual Torah Re-Run Series with Amichai Lau-Lavie’s Newest Year-Long Blog. To subscribe via email click here. To listen to the audio version click here. 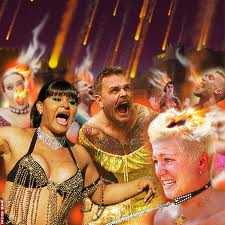 Play
Sodom סדום/Vayera
“NYC is like Sodom”, the taxi driver says on Tuesday morning, as the radio describes the rising panic in Manhattan and the taxi swerves into the Old City of Jerusalem.” They deserve it. It’s just like in this week’s Torah when God punishes the evil Sodomites with fire. This time it’s another flood.”
Seriously?? Where to begin? I am already tired and tense- from being up all night trying to communicate with friends and family back in NY, worried for some stranded, and unsure about the state of my ground floor apartment in the East Village. All I could muster was something like ” I’m from there, and I got three young children there, and plenty of kind and pious friends, some of them so called Sodomites, and you are evil and ignorant and are disgracing the Torah and the kippa on your head, so shut the f up and stop the car. NOW.”
He wanted to argue and discuss, beginning to apologize. But this, so sorry, was not the day for patient dialogue. I slammed the door and walked away. I heard him snicker.
I’m not even sure what angered me more. The lack of compassion for other people, the arrogant religious attitude that claims to know God’s ways and attributes natural disasters to some celestial selective codes of crime and punishment , the appropriation of the Sodom story as homophobic bile, or the simpleton’s reduction of a sacred text as a cause for hate.
Sodom is in this week’s Torah tale, Vayera, tucked between the birth of Isaac and his binding by his father, the city of sin is guilty and gone. Over centuries Sodom’s crime of violence becomes identified with homosexuality. But that’s not what this text is about. Not really, a closer reading exposes the reason for the rage – Sodom was a home for hate.
Two days later, the clean up has begun, though many of my friends are still without water, heat or power. Debris is still everywhere in the streets, spilling over sewers, and with the stench, I fear, will rise more of the dark malicious accusations, speculations, mystical meanderings, evil and ridiculous finger pointing like what I  heard in the taxi.
I understand people’s need to blame something, someone for misfortunes – but this type of reasoning needs to be nipped in the bud. zero tolerance for this kind of behaviour.  Those who scorn the modern Sodom are in fact its residents – the ones truly guilty of Sodom’s  sin – the hatred of others.
Here is what I wish I told that driver:
Sodom is a state of mind. It’s a terrible story about people who forget the meaning of kindness, and are lost in their own selfish greed and fear of others. The sin of Sodom is not same-sex love – it’s the lack of love – it’s violence.  And violence can live in words.
Sodom came and went but the story lives and so does hatred. Sodom is here and now – anywhere you let it fester. But it doesn’t have to. It’s your choice to love or hate the other and the stranger to your ways. Sodom chose one way – will you choose another? Leave NY alone – there’s plenty wrong there as there is in Jerusalem. Focus on what you can do today to make things better, leave the why things happen question to another day.
Off the soapbox now. In real life all I did was slam the door.  But I hope that in the days ahead the crisis mode will be replaced with humble kindness, as people on the East Coast and beyond continue helping each other, reaching out to those alone, sharing physical and spiritual nourishment and heat. I hope there’ll be no useless blaming but only smart awareness of what we can all do to take better care of the planet, and our cities, and of each other, and to rise to the challenge of reducing Sodom like states of mind anywhere we are. Maybe next time I will breath with more compassion and react with more patience to other people’s views no matter how annyoing.
To all of you in NYC and in the path of Sandy- rise gently from the mess, and rise with love.
Shabbat Shalom

One thought to “Sandy, Sodom, and How Not to Handle Disasters. Weekly Word #4”