amichaiJanuary 28, 2015general, writingsComments are off for this post
Sledding on Holocaust Memorial Day
Amichai Lau-Lavie
1/28/15
Sometimes snow is not just snow.
January 27 was marked on my calendar as “Event for Int’l Holocaust Memorial Day – 2nd Generation of survivors share stories at Museum of Jewish Heritage.”
I was asked to talk about my recently departed father, along with a distinguished and fascinating panel of other children and grandchildren of Holocaust survivors. Three days ago the event was cancelled because of storm alerts and postponed to 2/26.
Then indeed the snow began, hysteria ruled, schools cancelled, for me and for the kids, which is how we found ourselves at 11am on Tuesday sledding down a hill in Riverside Park on the Upper West Side, squealing with joy and freezing our butts.
Later on we built a snowman that quickly changed genders into ambigous, with a bonnet and a sign with a nod to ‘Frozen’ that read ‘I like warm hugs’.
It was a gift of a day. 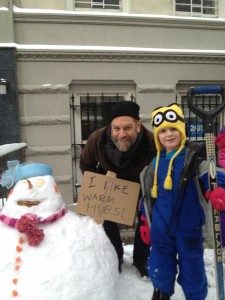 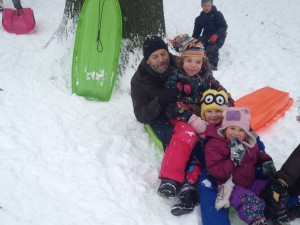 But here’s what I couldn’t tell my kids:
That I never forgot what day it was on the calendar. That the snow was so much more than what it seemed to be.
That as we were walking back from sledding, cold and wet and tired, Charlotte in my arms, the others right behind, carefully negotiating puddles and lumps of snow on the road, I had this image of myself in a different snowy landscape, with kid in arms, tired, cold, exhausted with no where left to run.
I remembered that day in January back in 1985 when my father and I walked out of an apartment building on Central Park West and a strong gush of wind and snow hit our faces and he fumbled for the car keys and said to me – the only time I remember him saying this so clearly – ‘it was like this in Buchenwald every single day.’
My kids are too young to know and will probably never  carry the unspeakable horror that my father handed over to me. The snow is just snow, the cold is just cold, there are other little things to complain about. Thank goodness. May they never know of persecution, trauma, fences, hunger, brutal death. This is how it should be.
But me, I I guess I’m scarred, I get to carry the burden, sbut I carry the scars like medals, like my father’s words still blowing in the wind.
I went sledding on the day on which the world remembered the liberation of Auschwitz and built a snowoman and lived and loved like normal people who like warm hugs do here, and there, and everywhere, back then and forever more.
There are several days on the calendar that mark this horror – personal ones and public ones. We can not forget. But today, we just went sledding. And it felt alright. It felt like sweet revenge, like memory becoming blessing in a little simple way.
This snow will melt, and with it all survivors and our stories too. What will remain?  Request for hugs, the memory of affection, the knowing that little human moments are the ones worth living for, and handing over, on each and every day.
May memories become blessings.