amichaiJuly 4, 2013Weekly Torah Blogs, WORDComments are off for this post
WORD: A Word a Week from the World’s Best Seller. Follow the Annual Torah Re-Run Series with Amichai Lau-Lavie’s Newest Year-Long Blog. To subscribe via email click here. To listen to the audio version click here. 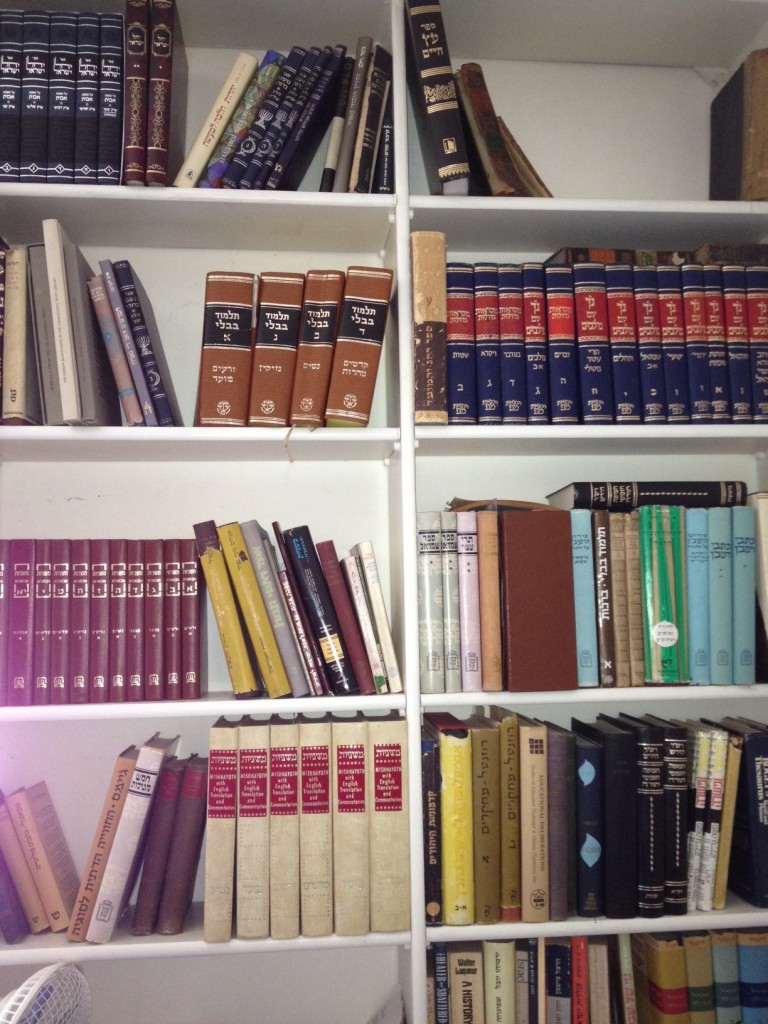 The line between keeping souvenirs and hoarding stuff is very  thin. As thin as a page in a book.
Utility will often win this war. But mostly when we really have to.
I’ve waged this war this week, packing up a year’s worth of living in Jerusalem, and also dismantling my library, almost 30 years in the making.
I leave back to NY on Sunday. Time’s up.  In addition to the relatively simple packing up of a rented apartment (do I really need this towel??), I also sorted through and took down the library I’ve built since age 15, until yesterday – still up on the wall at my parents’ home. They will be moving later this summer, to a smaller apartment, and the few hundred volumes that for so many years filled a wall in my old room had to go. Many were given to friends, some donated to worthy causes, six boxes will go into storage and as I sealed each box I wondered when I’ll see these books again. Maybe soon. Maybe never?
One has to travel light through life, less lingering on nostalgia and souvenirs, more focus on the essential and easy to carry from here to there. Less is more. And so I found myself leafing through memorabilia, precious but perhaps no longer needed? An antique book of poetry I bought, enthralled, in Oxford, England, over 20 years ago, remembering the thrill of texture, leather bound volume, noble letters and how that book gave me the sense of belonging, if only for the day, to this British intellectual realm, and to the world of poets and bards. But will I open it again, have I ever, is there room for this tangible memory on the shelves of my life? Into the ‘goodbye’ box it went, with many others, and with thanks, one last caress.
This packing gives me a chance to think again about the difficult and vital task of evaluation – what does one hold on to: items, values, stories, feelings – and what can one release – with gratitude, some sense of loss, but also, with relief?  We get to do this again and again -not only when we pack up our belongings – but every time we rethink about what it means to belong.
I leave Israel this time having released a lot of old books and a lot of old tightly held convictions, fears and opinions, whose time has come to go. Giving up so many of the books became a physical shedding of so many of the truths I sought inside them, for so many years, and so many of them no longer mine at all.
Perhaps the biggest one to go is the belief that the Bible is God’s word and as such completely perfect:  That the Torah and the Jewish people are the essence of ethical morality and choseness and all blame upon us is  hateful Antisemitic propaganda. That we are not to blame.
The books chart the course of my suspicion: The ones I got for my Bar Mitzva, classic volumes of Jewish legal codes and old school dogma, and then the ones I started reading and collecting on my own in years to come – Spinoza, Freud,  the books that questioned and cracked, page by page, my childhood citadels of certainty.
Take this week’s Torah text for instance, Matot describes the war that was waged by Israel on Midyan. It’s the last battle of Moses – fought against the people who took him in as a runaway, the people who gave him family – a wife and children. They are not mentioned but the battle is described in brutal detail, including the slaying of women and male children, and the capture of all virgin girls as booty for the soldiers. And a lot of loot.
Mountains of gold are possessed, brought into the camp and stores in the tent of time
‘as souvenirs, memorial before the Lord.’ (Num. 31:54)

Imagine traveling through the wilderness, so close to the promised land, and now with bags and bags of looted gold, for keepsake, for its values, for the burden of the bloody past. Who’s going to carry it all? And how will they – we – carry the screams and the blame? Is it worth it?
Like books I thank and discard, there are passages in the book of books that I no longer want to hold on to. I can’t box them up, and I don’t intend to tear out those pages, but I don’t want to keep them so close to my heart and I don’t want to celebrate them. Like some of my books, they go into storage, relics of a bygone past, still pulsating within us, bloody and blunt.
There are some that suggest we can edit the Bible, take out the messy parts that do not appeal to our modern values. Karl Giberson, a contemporary theologian, suggested recently that an ecumenical committee form and provide “An editorial process would at least be upfront about what was going on.”
My take is different. Leave it all in there. But translate, interpret, comment, and choose wisely which passages to highlight and revere and which ones to avoid.
I don’t have room in my heart for every souvenir of Jewish history, for every narrative and every heap of looted gold, mountains of blame, guilt, shame and sorrow.
Some of this has got to go if we are to make the lives of our future generations more livable, more hopeful, less burdened with the bygones of the past.
Throw out the bathwater. Keep the baby. Not easy when it comes to old convictions and sacred verses but it has to be done.
I’m aware, that unlike books, no matter how holy, the problems with the hateful narratives in the Bible is that they can’t just be stored away in basements – they are living legacies, practiced by many who take the word to be literal. In many synagogues this coming Sabbath, the Massacre of Midyan will be read as God’s command, as a Jewish war of justice and the right thing to do for our survival  – then and now – despite the cruelty and including the greed.
I don’t celebrate these stories. These are not my souvenirs.
To each his library of truths or her canon of the sacred. For me, this week, along with books I’ve shed and those I’ve kept, I honor all the truths I’ve learned, the ones yet to come, and the ones no longer stored on my bookshelves or in my heart. I want a lighter heart, less loads to carry, more room for compassion, care and justice, for new pages in the old book, for empty shelves that invite fresh starts and new beginning as the journey takes me on, away from this promised land to yet another, and again, and again.  Moving on.
Shabbat Shalom.
Amichai Lau-Lavie is the Founder and Executive Director of Storahtelling, Inc. creating sustainable solutions for life-long Jewish Learning since 1999. storahtelling.org

One thought to “Stash or smash? When sacred stuff becomes bad baggage. Word #39”