In Memory of my father

Just about Midnight, on a hot December night, under a full moon, alone in the pool, I am swimming in circles. 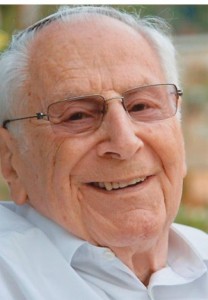 Three hours earlier he died quietly, in a hospital in Jerusalem.

This is the first time I think of him – write about him – in past tense.

I’m thousands of miles away in a remote corner of Costa Rica. When the sun rises I will begin the long journey home on the first flight I could find. I hope I’ll make it in time for the funeral.*

I just got here yesterday, to officiate the wedding of Hana and Devin, a lovely couple, dear friends. And just before the ceremony began, on a stunning beach, I got a txt message from my brother that they checked into the hospital and that I should keep my phone on, even though it’s Shabbat. It may be critical.

It was a beautiful ceremony. Champagne was handed out to all just before it ended, Devin drank and emptied his glass , I wrapped it in a napkin, placed it on the ground, and he stamped on it as we all erupted in song and cheers: Mazal Tov! They kissed, the sun set, shabbat was about to begin and the feast along with it.

I checked my phone. It’s a matter of hours. Get on the next flight.

The broken champagne glass wrapped in a napkin was in my other hand.

I left the wedding party to go back to the house I had been staying in he texted the three Hebrew words I had been dreading. Baruch Dayan Emet. Blessed is the Judge of Truth.

I found the fastest flight I possibly could. Packed. Spoke briefly with my mother, sister, a few friends.

It was now late at night, almost midnight, the house was empty, the wedding celebration going on, the moon full, the pool empty.

So I went swimming, in circles, just like my father did, for so many years.

I remember it from childhood. He’d take us to the Gordon pool in Tel Aviv. Most would swim laps, but he, only circles, head always out of the water, like a sea turtle, breast-stroke, slowly, round and round, squinting without his glasses.

Many year later, frail but  determined, he was still at it, in the pool at the Ramada hotel in Jerusalem. I drove him there a few times, when he was still strong enough to swim, but unstable in and of the dressing room pool, until it was not safe anymore.

First he stopped to write, then to drive, then to swim, then to walk, then to remember, then to recognize, and then, tonight, to breath.

So I swam tonight, circle after circle, tears mixed with chlorine, full moon reflected in the water, breathing slowly with each stroke, just like he showed me, forty years ago.

Why did he swim in circles? I asked him once and he didn’t have a good answer. Or maybe he did and I forgot.

Maybe it was just his way of being in the world. Slow, persistent, circles.

My father was a hero.

He survived the Holocaust, made sure his younger brother survive as well, to continue the family’s rabbinic legacy, to fulfill his vow to his own father.

At 13 he entered Auschwitz. At 18 he was liberated at Buchenwald.

Everything that came after that was life well lived for, circle after circle.

His career as a journalist, author, diplomat. The family he created with my mother Joan – his wife of almost 60 years- he lived to play with great grand-children. His cynical Galician sense of humor. His love for Israel – the country he had helped to build, to fight for, to represent. Circle after circle of a life. Survival for the long haul. not laps. circles

When I was a young paratrooper, barely making it through basic training, it was my father’s daily letters, in his meticulous handwriting, that kept me marching. He’d write about how proud he was of me, how I’m living his dream, and that of his parents. Every march, with a stretcher on my back and ankle straining I’d keep his words and keep on marching, step after step.

We had our humps over the years but found ways to meet in the middle of our different views on politics and religion. He rose to the challenges of accepting my different ways of being Jewish in the world, my sexual identity, alternative parenting. He was proud of my path and successes, blessed my rabbinic path as a continuity of the chain he survived to maintain. He loved my children.

The last time I saw him in person, a month before the new Jewish year, I sat by his bed and asked him to bless me, as I had done each time I said goodbye and went back to NY. He looked at me, really focused for a few seconds and blessed me with love. Everyone else, he added, you already got.

Somewhere in the Talmud it says a father must teach his children how to swim.

Thank you Abba, for teaching me how to swim, how to survive, to thrive, to not give up, to know that I am part of a bigger circle,  something so much greater than us all.

Swim into the endless circle.

* I made it to the funeral. The flight from Costa Rica was 40 hours long, with three legs through Miami and Germany, a surreal pilgrimage, half of it with Air Berlin, an irony not lost on all of us. Had Abba known how much that one way ticket cost, I told my siblings when we met, embracing in the funeral home in Jerusalem  – he’d die. I didn’t tell them how much the shirt that I bought in the airport in between two flights had cost – a shirt I got to rip and wear for this week long shiva. I never buy Hugo Boss – one of my post Holocaust quirks – he was Hitler’s tailor – but I did this time. Bought it to rip it. sort of made sense.

The President of Israel spoke at the funeral, my uncle, Rabbi Lau, and my brother, another Rabbi Lau. Before the body was lowered to the ground we took out the two envelopes with sacred soil from Treblinka and Ravensbruck – the two death camps where his parents perished. It was his wish that they would be finally given a grave – along with his, in Jerusalem.

More will be remembered. But tonight, now in Jerusalem, our family crowded and the photos and stories and memories and tears flow. I am saying the mourners kaddish. We are swimming here together, privileged to carry this legacy on.

7 thoughts to “Swimming in Circles: Farewell to my Father”