Amichai Lau-Lavie is breathing new life into ancient Biblical tales with his project ‘Storahtelling,’ a method of Torah engagement that has won fans in the United States and is starting to find an audience in Israel. 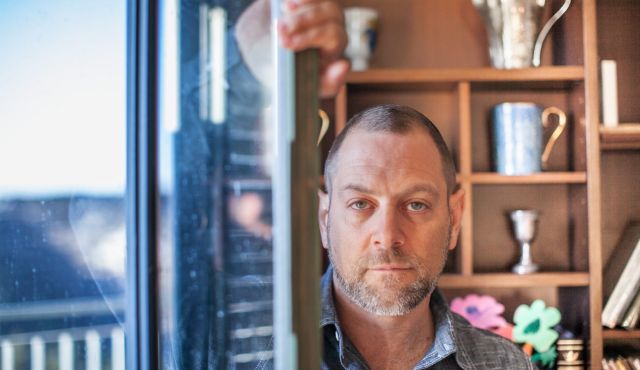 Amichai Lau-Lavie’s “Storahtelling” project has earned him celebrity status in the Jewish hipster world of New York and beyond. Photo by Emil Salman

The Torah reading of the week provided the performing-artist-turned-aspiring-rabbi Amichai Lau-Lavie with the perfect opportunity to illustrate the relevancy of ancient texts for modern times: Two feuding brothers, in this case Jacob and Esau, put aside their differences and meet up after many long years – sound familiar?

Israeli-born Lau-Lavie, who lives in New York, is spending the year at the Schechter Institute in Jerusalem as part of his rabbinical studies program. In between tackling issues like whether women in the Conservative movement should be allowed to participate in the priestly blessings and preserving faith in God after the Holocaust, he’s taking advantage of his visit back home to spread the message of “Storahtelling” – a project he launched when he moved to New York 14 years ago that uses storytelling and performing arts to breathe new life into the ancient Jewish texts.

It’s a project that has earned him celebrity status in the Jewish hipster world of New York and beyond, where he’s already trained 400 professional Storahtellers, or “Mavens” as they’re more commonly known – a modern-day breed of the “meturgeman” who would translate and interpret the Torah stories for the masses.

This past week, he demonstrated his skills at Kehillat Yachad, a Modern Orthodox synagogue in Tel Aviv, where he also held a special session with the youngest congregants dedicated to the story of Jacob’s ladder. “It was a great opportunity for the kids to talk about their nightmares and fears, especially with what was going on here last week,” says Lau-Lavie.

His edgy, jazzed up interpretations of the ancient texts often involve playing the role of characters in the story, injecting music into the dramatizations, and engaging the congregants in more interactive discussions, often challenging them to draw modern lessons from the ancient stories. Unlike the traditional Shabbat sermon, delivered by the congregational rabbi after the Torah reading, Storahtelling involves real-time interpretations of the text, with the “Maven” standing at the pulpit right next to the Torah-chanter.

Spreading the word in Israel, he says, presents unique challenges. “Israelis already speak and understand Hebrew, so it’s going to be interesting to see how they react to the idea of someone interpreting the Torah for them.”

Among the projects he has lined up for the coming months is a training course for professional storytellers in the art of Storahtelling that will be offered this spring at Elul, a center for Jewish pluralism in Jerusalem. In addition, he’ll be running a course for “Mavens” at Neviah, an alternative Jewish learning center in Tel Aviv.

Storahtelling, which is a registered non-profit in the United States, has put considerable emphasis in recent years on reaching out to bar- and bat-mitzvah age children and helping them incorporate storahtelling techniques into the traditional ceremony. Training individuals in Israel to work in this niche market is another one of Lau-Lavie’s goals for the year.

Bridging past and present

If his approach to teaching Torah is not conventional, neither is his lifestyle.

The son of Israeli diplomat Naftali Lavie and nephew of the former chief rabbi Yisrael Lau, Lau-Lavie is a 43-year-old, single, out-of-the-closet gay man with three biological children – ages 2, 4 and 6 – from two women who live together as a lesbian couple in New York. A descendant of 37 generations of rabbis, Lau-Lavie broke away from his Orthodox upbringing when he was in his early 20s.

His interest in Torah stories was sparked 17 years ago, the night Prime Minister Yitzhak Rabin was assassinated. “At the time I was studying about the sacrifice of Yitzhak, and then Yigal Amir comes and says God told him to do it,” he recounts. “Here was the sequel to the story in the Torah. Yigal Amir was an informed and educated Jew, and he used that to bring about the sacrifice of Yitzhak. I realized then that unless I and people like me find other ways of interpreting these stories, they’ll be hijacked by the Yigal Amirs and Dov Liors [a radical settler rabbi] of this world. That’s when I decided to become a storyteller.”

The practice of Storahtelling, says Lau-Lavie, devloped 2,500 years ago in the early Second Temple era, when illiteracy among the Jewish population was rampant and the people lacked a shared narrative. “Ezra and Nehemiah created this ceremony of storytelling, which they had probably learned from the Persians,” he explains. “They would bring the Torah out to the people. Someone would chant from the Torah and someone else would translate or interpret what was being said – providing the subtitles or close captions. We’ve been congealed as a people because of that ceremony.”

About 1,500 years ago, the practice died out and with it the profession of Torah interpreters. While serving as an artist-in-residence at Congregation B’nai Jeshurun, Lau-Lavie noticed that every week, people would simply “check out” whenever the Torah reading began. “It was the silliest thing,” he says. He told the rabbi he wanted to launch an experiment using the New York congregation as his guinea pig. “We called it ‘Saturday Morning Live’ at first, and people were absolutely riveted,” he recalls. “That’s how Storahtelling began.”

His determination to use the Torah stories as a vehicle for promoting peace and coexistence, says Lau-Lavie, is what eventually motivated him to become a rabbi. “Religious leaders can make peace,” he says.

The ultimate objective of Storahtelling, according to Lau-Lavie, is bridging the past with the present. And next week, he’ll be traveling back to the United States in the hope of building another bridge of sorts. “While I was sitting here last week and there were rockets flying all over the place and sirens going off, I was shocked that so few people abroad thought about calling and seeing how I was doing,” he recounts. “It made me feel there’s a big disconnect between here and there, and that got me to thinking about the dreidel, which is something that really illustrates that disconnect. In Israel, the dreidel has the letter ‘peh’ on it, which stands for ‘po’ or ‘here,’ and everywhere else it has the letter ‘shin’ on it, which stands for ‘sham’ or ‘there.’ So I’m going to be bringing to America 500 dreidels that have a ‘peh’ on them to show them that ‘there’ is ‘here.’”