(This essay/proposal for a play was written in 2002 – I don’t remember what was the reality check that inspired it. These days, summer 2014, 12 years later, with a new harsh reminder of the role of zealotry in our tradition and in our midst – I dug it up, and am reposting, with mixed feelings, but sadly, with clarity that little has changed – yet much can still change, for good.)

Holy Jewish Terrorism OR The Problem with Pinhas

(6 notes for a possible play based on Numbers 25)

According to rabbinic hermeneutics, solicitation—the wrestling of meaning from text—has to be done by people with ears and eyes on the look-out, attentive to the whole from which the excerpt is taken, open as well to life: the city, the street, other human beings…(Emmanuel Levinas)

As the curtain opens and the sacred scroll is rolled open we are introduced to this week’s installment of the eternal re-run series: The Torah.

Tales of wisdom, wonder and inspiration are revealed weekly as the scrolls open, but skeletons, too, reside in that holy ark. Dark, violent tales that challenge our modern views and sensibilities.

The Torah portion entitled ‘Pinhas’ is named after a young Levite terrorist and his rise to fame and eternal priesthood. It’s a classic good-guy-beats-bad-guy scenario—except that I’m not really sure who’s really the bad guy, and who’s good. It is a disturbing drama, demanding scrutiny—an opportunity for serious ‘God wrestling’. 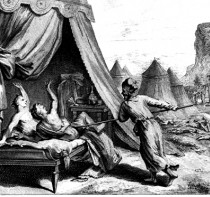 Why does Pinhas REALLY do it? How do I relate to a God that approves of murderous zealotry? Can we deal with this harsh element of our mythic legacy? Can we heal it?

Cultural war is waging in the camp of Israel. Other gods are worshipped and the authority of Moses is challenged. In an act of defiance, a ritual sex act is conducted in front the people, at the threshold of the tent of meeting. A Pagan princess is copulating with a Hebrew elder, the chief of the tribe of Simon. Moses, himself wed to a non-Jew, is silent. The people weep. The Torah doesn’t specify how long this scene lasted, before one young man jumps out of the crowd and stabs them both, joining them eternally in death.

The young man is Pinhas, a Levite, grandson of Aaron the High Priest, and future High Priest himself. His zealous act is instantly awarded with a special contract with God: A covenant of peace, a place of honor among the rank of the priests, and eternal life. (Be-Midbar, The Book of Wilderness, chapter 25)

Pinhas, son of Elazar, grandson of Aaron the High Priest, member of the tribe of Levi. The Levites are notorious for the massacre of Shehem (modern day Nablus) on account of inter-racial relations. They served as Moses’ army at the time of the Golden Calf revolt as well, killing 3,000 of their own kin, guilty of idolatry. Their elevation to Divine service as God’s priests did not go unchallenged by the other tribes and is recorded throughout the book of Be-Midbar. Pinhas represents their transformation from warriors to priests. (Terrorists who become generals who become prime ministers.) According to mystical traditions, Pinhas’ soul reincarnates in Elijah the prophet, representing the archetype of the immortal Zealot.

Zimri, Son of Salu—the leader of the Tribe of Shimon

According to the Midrash, Pinhas pauses to pray after he has concluded the killing. What were the words of his prayer?

Scene: He is standing erect, bloody sword in hand. Lights fade. In the background we hear a man praying in Arabic. Over the Arabic prayer the voice of a TV newsflash: a suicide terrorist attack in Tel Aviv.

Murder in the name of God, for God—how can we put it behind us if we are still telling this story? Can we prevent the Dr. Goldstein and Yigal Amir phenomena before zealotry strikes again?

Pinhas represents intolerance towards the Other, blurring theology, racism, and social anarchy. Modern terrorists—often recruited in the name of God—claim similar goals and similar ways of attaining them.

If we support Pinhas’s act how can we condemn his Palestinian successors?

Sex, and especially the issue of Unkosher sex—i.e. inter-racial relations, is really at the heart of this story.

The fatal sex act was not merely a public spectacle: it was a ritual re-enactment of Divine coupling—a pagan rite practiced throughout the ancient Near East. The problem here, it seems, is not the publicity of the act but rather its social implications. Idolatry and adultery are here represented as one—so to speak.

Contemporary reading of this text brings to mind sexual crimes—they too are products of violent jealousy, abuse and rage. The sad story of Dinah is echoed in that of Pinhas. Equally relevant are the issues of inter-marriage and alternative sexual lifestyles—and the levels of their social acceptance or rejection.

The following Talmudic midrash illustrates these social and sexual complexities perfectly, ready as is for a modern stage:

And Moses said to the judges of Israel, “Slay every one of the people who worshipped Baal Peor.” Thereupon the tribe of Simeon went to their leader, Zimri ben Salu, and said to him, “They are killing us, yet you sit silent?” He rose and assembled twenty-four thousand Israelites and went unto Cozbi, the daughter of Tzur, and said to her, “Surrender yourself to me.” She replied, “I am a king’s daughter, and my father instructed me, ‘Yield only to their greatest man.’”

“I too,” he replied, “am the prince of a tribe; moreover, my tribe is greater than Moses’s, for mine is second in birth, whilst his is third.”

He then seized her by her hair and brought her before Moses. “Son of Amram,” he exclaimed, “is this woman forbidden or permitted? And should you say ‘She is forbidden’, who permitted you to have Jethro’s daughter?” At that moment Moses forgot the law concerning intimacy with a heathen woman, and all the people burst into tears. And Pinhas saw what was happening and remembered the law, and said to Moses, “O great-uncle! Did you not teach us this on your descent from Mount Sinai: He who cohabits with a heathen woman is punished by zealots?” Moses replied. “He who reads the letter let him carry out its instructions” (Babylonian Talmud, Shabbat 82).

A few chapters after the Pinhas incident, as hostility turns to war between the Midniaites and the Israelites, sexuality again meets up with politics and war crimes:

And the people of Israel took captive all the women of Midian, and their little ones, and took the booty of all their cattle, and all their flocks, and all their goods. And they burned all their cities where they lived, and all their encampments, with fire…. And Moses said to them, have you kept all the women alive? Behold, these women caused the people of Israel to trespass against God in the matter of Peor, and there was a plague among the people of God. Now kill every male among the little ones, and kill every woman that has known man by copulating with him. But all the young women, who have not known a man by lying with him, keep alive for yourselves. (Be-Midbar 31)

And what, I wonder, happened to Tzipporah?

6. The right to protest

The people wanted to excommunicate Pinhas, had not a voice of heaven spoke out and said: “I grant him a covenant of peace” (Jerusalem Talmud, Sanhderin 89).

At least I know I’m not the first one to dislike Pinhas and to protest his place of honor in Jewish history. The masses, according to another Talmudic source, scoffed at him: “Look at this man whose grandfather sold calves for idol worship—and he’s gone off and killed an elder over idolatry!”

Jewish law, developed by Rabbinic authorities, ruled Pinhas’ act as a law that is not to be taught, an aberration reserved for emergencies. Not official party line.

But what do I tell a twelve-year-old boy who’s learning this story for his Bar Mitzvah?

What lessons will he learn from this?

I hope he will realize that Torah is relevant and compelling—forever challenging our minds and hearts. I hope he will learn how to wrestle with meaning, with tradition, with myths and ideologies. I hope he will be brave like Pinhas, but I pray he will learn from Moses how to sometimes be silent. Mostly, I hope he will understand that hate breeds hate, and that zealotry is only a short-term solution, while compassion and patience lead the longer way to peace.

Final scene: a young man stands in front of an open ark. In the background we hear Hebrew chanting: Va-yakem Pinhas… And Pinhas stood up…

But what do I tell a twelve-year-old boy who’s learning this story for his Bar Mitzvah?

What lessons will he learn from this?

I hope he will realize that Torah is relevant and compelling—forever challenging our minds and hearts. I hope he will learn how to wrestle with meaning, with tradition, with myths and ideologies. I hope he will be brave like Pinhas, but I pray he will learn from Moses how to sometimes be silent. Mostly, I hope he will understand that hate breeds hate, and that zealotry is only a short-term solution, while compassion and patience lead the longer way to peace.

Final scene: a young man stands in front of an open ark. In the background we hear Hebrew chanting: Va-yakem Pinhas… And Pinhas stood up…