Strolling through an antique store in Warsaw, Poland’s capital, this past Saturday afternoon, Suzanne and Ellen, mother and daughter visiting from Seattle, along with a group of 25 Jewish North American tourists, noticed something familiar looking on a top shelf: Parchment with Hebrew writing on it.
On another display was an old looking white velvet Torah cover, embroidered with the Ten Commandments and two tattered lions.
“We had to buy these treasures, to redeem them,” Ellen shares the story with our group an hour later, tears in her eyes and in ours, “we couldn’t just leave them there, not after hearing your father’s story.”

This was the second Sabbath spent as a group together on the road in Poland, and many of us have gotten to know more of each other’s stories and share that cozy if temporary closeness known to pilgrims and fellow travelers. Organized by the very cordial and efficient Jewish Heritage Travel team, in collaboration with the Museum of Jewish Heritage in NYC, the 12 days long trip promoted 5 star travel and the exploration of “The Jews of Poland:Yesterday, Today and Tomorrow.”

I was honored and excited to be invited to join the trip as a Scholar in Residence, to share teachings about the 1,000 years of Polish Jewish history and culture, as well as the stories of my father’s family’s Polish history and the many illustrious ancestors who’ve helped shape, primarily rabbinically, this community’s heritage.

In one of the meeting rooms at the Bristol Hotel on Warsaw’s elegant Royal Road, Ellen slowly uncovers the parchment, removing bubble wrap and tissue paper. The group watches with bated breath and I unroll what is unmistakably a Torah scroll fragment, in perfect shape. The fragment begins with the very beginning of the Torah, the first words of Genesis, and ends abruptly in the middle of the flood, half way through the end of the world. “I don’t know if it’s true,” Suzanne says, but the guy selling it told it is was found here in Warsaw, either during Second World War or right after.” 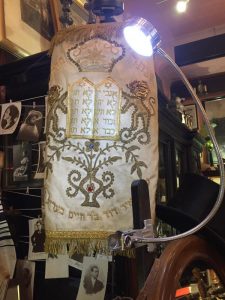 On Friday, before arriving in Warsaw for this second and final Shabbat together we spent a few hours in a city seldom visited by tourists. Piotrków Trybunalski, a city of 75,000 in Central Poland was where my father grew up and where his father served as the town’s last Chief Rabbi. In 1939, a third of the city was Jewish and the first Ghetto in Poland was built here. No Jews live there today, but the Great Synagogue remains, now a public library. In previous visits my father has shown the town to our family and to our visitors, telling about the good days and the bad days, pointing at the painful markers, only hinting at the depth of scars.
On this visit we met with Polish High School students, seated on the second floor of the library, in front of where once stood the Ark containing the Torah scrolls. I shared one of my father’s stories – about the night in September 1939, when he, age 15, helped rescue the 32 Torah scrolls from the ark, per his father’s instructions.

Suspicion that the synagogue would be burned down by the Nazis who had just occupied Poland, my grandfather, Rabbi Moshe Chayim Lau, ordered that the Torah scrolls be removed and buried for safe keeping. My father and his friends, under the guise of darkness and in spite of the curfew, hitched themselves to wagons and walked through the few miles to the local Jewish cemetery. There they found a spot to hide all scrolls. They were hoping it was only for a few weeks or months at most.

When my father came back in 1945 the scrolls were gone. And when he came back in 1982 with a group of American tourist they met on Old Polish woman at the cemetery who told them the story of the scrolls: Her father was the watchman of the cemetery during those years and he saw the boys hiding the scrolls on that night in ’39. He moved them to another place and when the war was over handed them over to the Jewish community in nearby Lodz. From there their fate is unknown.

Meeting with young Polish students in the vast hall where once my family prayers, where they were later imprisoned, where many were shot, was not simple. I wanted them to know what had happened here, but also to let them know of that cemetery watchman and his deed of kindness. On another floor in the same building, right behind the young children’s library collection there remains one part of the original plaster that decorated the synagogue. Right above the ark was a depiction of the Ten Commandments, flanked by lions, with verses from the Psalms below. In 1942, as the Ghetto was liquidated and our family and so many others were divided, killed and enslaved, many were temporary jailed here and gun shots perforated the walls. All that’s left are these bullet-perforated Ten Commandments and lions roaring in silence. I wanted the students and the tourists to see those too. We stood there among the metal shelves with Harry Potter in Polish and stared, roaring in silence. 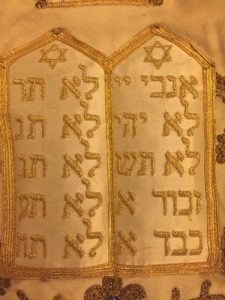 “We thought of your father’s story,” Ellen said, “and who knows where this Torah is from, but we had to make sure it will be once again in Jewish hands.”

The Torah parchment bought in Warsaw ended mid flood, mid horror, pre rainbow and hope. Torn by its seams, it nevertheless survived the flood and is now in Seattle. Suzanne and Ellen want to find out about its origin and maybe trace its story? We’re not sure how one goes about doing that these days so all suggestions are welcome.
The Torah dress, again the Ten Commandments and the tattered lions, dedicated ‘To Meir David son of Hayim Beril of Blessed Memory’ is also seeking a trace. Who knows where these come from? All suggestions and advise most welcome and appreciated. 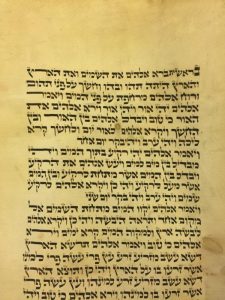 Today is Shavuot, the holiday of Revelation on which according to tradition the Torah was revealed on Mount Sinai, though details and historical facts are vague. Since the 16th century, thanks to a surge of interest in Kabbala and mysteries as well as the rise of coffee, the tradition of staying up all night on Shavuot became popular, as people probe the secrets and teachings of the Torah, making meanings for our lives.

This year, among the many teachings, here’s this one story, of a Torah revealed in Warsaw, from the beginning, again, from the flood, again. We are still here. Somehow, this tribal story goes on, fragments and connections hidden and revealed, one story becomes part of another, across generations and acts of kindness, secrets unraveled, a bigger picture revealed. 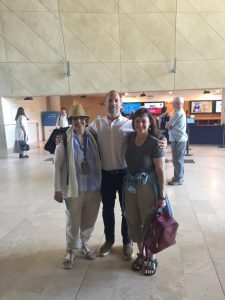 Sometimes, silent as lions, we roar at the horror and the beauty of it all. Sometimes, we sing:

Etz Chayim: She is a Tree of Life.”