amichaiFebruary 28, 2013Weekly Torah Blogs, WORDComments are off for this post

WORD: A Word a Week from the World’s Best Seller. Follow the Annual Torah Re-Run Series with Amichai Lau-Lavie’s Newest Year-Long Blog. To subscribe via email click here. To listen to the audio version click here. 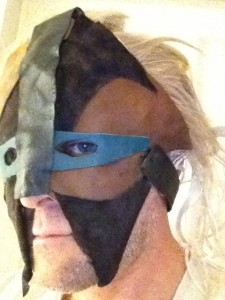 Purim was fantastic in Jerusalem. I made my own lionesque mask from strips of leather, to wear at one of the parties and dance, unknown. It turned out to be a bit more scary than sexy.. But it was an important lesson: another version of me peeped through the eyes, rougher and raw. Something here needs to be explored and worked out. Something about rage. And it turns out, it wasn’t just me. Behind the collective mask of Purim in Israel a terrible face was revealed, again this year: A racist, hateful, ancient and aggressive Jew.

Now that the hangover is over and the masks are put away, the truth, as painful as it is, demands the clarity of sober reflection.  What lurks below this surface is murky and dangerous – and very real. I’ll deal with my own shadow work in therapy.. But the greater collective shadow looms larger and troubling.

Who’s beneath the masks?

It started on the Shabbat before Purim, as Sara-Rose became a Bat Mitzvah.  At a small makeshift Orthodox congregation, she chanted from the Torah scroll – at a separate reading for women only – I peeked in the back. She was smiling and confident, in an Oscar worthy purple dress, voicing the words that are reserved for this annual pre purim reminder: ‘Annhilate the Memory of Amalek – do not forget.’

As is the custom, everybody rose to their feet when she started chanting – committed by law to remembrance of the mortal enemy of yore and to its demise.  The Biblical narrative about Amalek  – the obscure Semitic tribe that attacked the fleeing Hebrews from Egypt for no apparent reason – is later linked to Haman and the long historical legacy of anti semitism and persecutions. “Never Forget” came way before the Holocaust – a tribal war cry that gave our ancestors perspective, and hope. For many centuries, as our people suffered as minorities, power, revenge and annihilation were but a matter of  collective fantasy. On Purim, venting the steam, we let loose our fear and hate of other with every round of grogger.

But now we got power. And with each Purim I wonder about the role of this old war cry, and the price we pay for its presence in our lives as we stand up to retell this story.

I stayed seated. I’m uncomfortable with this built-in obligation to fear and destroy. I get the sacred luggage of our memory, the value of honoring our past, including the pain.  We have to be watchful and not delirious and hippy-ish peace at all costs defeatists.  But somehow this Torah, along with the brutal Purim Megila, brings up something really old and I think – very wrong.

I dont think it’s our real truth – it is some terrible mask that we forgot to take off.

But not everybody thinks so.

For many, this time of year,  the Biblical commandment to destroy another race is translated into racist violence.

This Purim marked the 19th anniversary of the massacre in Hebron, when Baruch Goldstein, an Israeli doctor, settler and  member of the far-right Kach movement, shot dead 29 unarmed Palestinian men who were praying at the Cave of the Patriarchs.  His suicide note made it clear that he was motivated by the Purim command to blot out Amalek, which he, and now more, identified as Arabs and/or Palestinians.

I can say with certainty that Purim 94 changed my life – and I know it did so for many others.  I realized on that day that underneath the frivolity of the carnival and the joy of community celebration peek our biggest skeletons and secrets –  waiting for an honest face to face, for encounters with our own most often repressed violence.

It’s not so repressed anymore.

This past Sunday night, in Tel Aviv, a group of drunk youth, in costumes,  attacked an Arabic man who was on duty cleaning the streets. He was beaten with glass bottles and rushed to the hospital.

The next day, in Jerusalem, an Arabic woman was attacked  in broad daylight by a few drunk Jewish women and other bystanders, her head covering was ripped off, amid slurs and beatings. There’s still confusion about what happened here, and these are isolated cases – but they are no longer rare.

No masks were worn at either attacks but everybody involved in it was wearing one if they liked it or not: Arab, Jew, Victim, Other, Threat, Fear.

The attacked saw attackers who attached for no reason. Amalek.

Below the masks we’re the same.

And that’s the problem with masks – they only reveal a fraction of the truth. And the truth is that we are all connected in many many more ways that we can imagine. Those who act our violence do so because they are deluded, they see the outer so called masks and miss the bigger picture, over and over again.

We’ve been here before, in mask mentality. It happened  when we created, as a nascent nation, our first collective mask.

In this week’s Torah text Ki Tisa, the Hebrews yearn for leadership, security, and God. In the absence of this comforting presence they create a substitute deity and confuse it with the greater abstract mystery which is all life.  The Golden Calf, our first communal Jewish project turned false idol –  is referred to in these verses, according to some translations, as ‘the calf mask’.

Masks can be a problem when they blur the face of truth and create alienation.
The Golden Calf became a problem because it was a mask that obscured the faceless face of the Divine – found in every living thing, within the eyes  of each and every other person. Instead of a unifying force it created alienation.
The urge that got the Hebrews to form and dance around a hallunciation that gave them security is a real, important, precious urge. The need of some people to strength their sense of self by demonizing others is understood. But masks are not to be confused with what’s real.
And we sometimes need to wear the mask in order to remember what we really look like from within. And that we are, truly, always one.
That’s the real message of Purim. No Israel or Amalek. Haman and Mordechai. All is one. A hard lesson to learn. What do we do with the pain, with the rage?
I took off my lion mask when it was no longer who I yearned to be that night. I wanted warmth, not alienation. The mask will need to be revised.
Our larger masks, fears and scars that have defined us very essence, are more difficult to remove.
But maybe we can pause, and take a long look in the mirror, before packing the masks away for another year, with these news of beatings in our face, and know that we have work to do, and what to heal, so that this violence is studied, stopped. That young girls in party frocks may chant another version of our story on the days they come of age, and what we choose to remember are not just the fears of what happened, and that we are truly all connected, and remember the  courage to  love. Without the masks of fear.
Shabbat Shalom.