amichaiOctober 4, 2013UnscrollingComments are off for this post
UNSCROLLING: A Year of Wrestling, Quoting, and Reclaiming Torah
Amichai’s New Weekly Blog (10/2013-10/2014)
This year I’m reading the weekly Torah portion through the eyes of 54 creative wrestlers   in Reboot’s new book Unscrolled. My year long journey will be blogged weekly as commentary on their commentary, quoting quotes, plucking pearls from this pool of biblically inspired juices for a more inspired now. 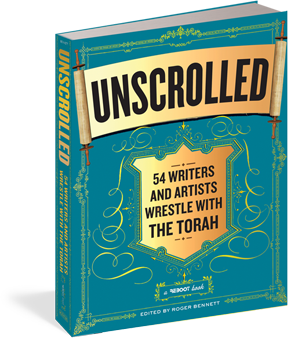 Week One and Two: The Saddest Road
“Guide me to write a different better story.”
Josh Radnor believes in God and jump starts this journey. But he’s not praying here to that angry scripture papa that smites and judges and alienates. 72% of American Jews believe in some sort of God or universal spirit, according to the new Pew Report released this week  – and I think more will believe and pray and feel part of something bigger if they read what Josh was writing about divinity –  wild, and loving, mystery, a moan, a father-mother mixer at the core of what we are. Not that what matters is if more people  believe in God and if more Jews know more  Torah and Jew it better. But what matters, here, to me, is the beauty of the journey, questions asked, words that tackle life’s big meaning, ancient text as pretext to the journey of our lives. If this was the case then this report would look quite different and I think one day it will. So many of us are so removed from the simple soul truths that are covered by layers of austere religion. We need to start again, from the beginning.
Radnor, a beloved brother, brave spiritual warrior, prays the first step of this year long journey: “Teach me the true meaning of the garden, the snake, the apple and the fall. Let me learn anew.”
Then fall, and flood, and crash:
“The tower crashed. After the dust cleared, the people looked around, bewildered, coughing.
They all began talking at once. It was loud and confusing.. Someone was singing a song no one had even heard before, to a melody that had no match.
I was weeping on the ground and a man walked by.
…He reached into  his pocket and unscrolled a parchment. He read it quietly for a while. Than handed it to me.
I could not read a word of it, but mostly it was just a picture of a road. A long road into an open horizon, which matched the view I saw when I looked up.
But where does it lead?
To everything.”
Aimee Bender takes on Babble – tower, topple, words gone wrong, what happens when communication crashes, quoting Andre Breton, she frames the second Torah portion and the second genesis of our human polyglot reality sending us to translate signals, seeking ways to get on the same scroll:
“Keep reminding yourself that literature is the saddest road that leads to everything.” Aimee quotes Breton, and I quote her here, traveling along the same and the saddest road, less traveled by and also full of smiles, that leads to everything, one word, one week at a time, unwinding like this giant scroll.
Join us for the journey.

Related Articles
Still No Abomination. My Imagined Bar Mitzvah Speech is back