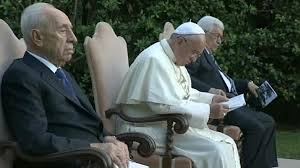 This past Sunday, Pope Francis invited the Israeli and Palestinian presidents to pray with him for peace.
The day before, His Holiness tweeted: Prayer is all-powerful. Let us use it to bring peace to the Middle East and peace to the world.
I wasn’t invited to Rome, but I wanted to be privy to this ritual, so I watched it online,  pausing, here and there (it was over two hours long), to actually feel moved enough to pray.
But most of the time I struggled to be moved. Judging by the faces of the fidgeting delegates in attendance, representing three religions, splendid religious garb, and at least three versions of God, I was not the only struggler. It was very serious, solemn, and, well, long.
There were highlights: The Palestinian delegation chose the only participating woman (other than the MC) to read aloud a few sacred texts. A rabbi and an Imam, respectively, sang out loud  – with what seemed like real intention of prayers and verses.  Strings and harp played in between the lofty words, with some melodies quite pretty. An olive tree was planted at the end by all three leaders. No tears were visibly shed.
So I watched, hoping to see  – to feel – something ‘real’ happen – despite the general buzz about how politically insignificant and possibly empty this papal gesture was.
I wanted – and still insist on wanting – to believe that such gestures have actual meaning, impact and the ability to somehow crack or even shatter the  stubborn walls of refusal to change.
I want to believe that prayer can help where other forms of communications fail. Not necessarily because prayers are addressed to the Creator one does or does not believe in but because prayers open up the ones who pray to be more vulnerable, more open, more fully human, fragile, and sincere.
I’m told that this was the first time Muslim prayers were publicly recited at the Vatican. And that although not for the first time – this was a big moment for these three religions to come and pray together in such prominent display of faith and yearning for progress.  I am a big believe in the power of interfaith gatherings to dispel the centuries of malice and suspicion, turning to a brave new page.
If anything is going to get the Middle East out of the rut it is in – it’s likely the role of gutsy faith leaders able to re-imagine the sacred narratives that have become so often tools for hostility instead of vehicles for compassion.
Perhaps this prayer summit will help encourage more religious leaders to reach out to others across the lines, and to delve deep into our wisdom shared by all our traditions, beyond the borders and the hyperbole, to retrieve the spirit of unity and shared values.
Perhaps.
There’s blood on all hands here. Let’s not forget. The pope’s bright white mantle is sprinkled with ancient drops of bloody crusades. Abbas and Peres, two old war horses, one on his way out, the other soon to follow – are no innocents either, representing complicated and brutal attempts to make one country work for two nations at terrible costs.
But here they sat, stiff in big chairs, admitting by their mere presence that the truth is bigger than them all, and the fact that the only way out of this mess is to appeal, together, publicly, to the mystery residing way above and way below and deep within each and every one of us.
They did what prayers do – admit, out loud: We are vulnerable. And we need help.
Because of our collective failures to make the world a better place where peace pulsates like mightily rivers – we appeal to God or Allah or Hashem or Mother Earth or the Power that Calls for Salvation or whatever, in a humble plea for strength to do the work.
An affirmation of the possible, against the odds. In today’s cynical, sorta-secular society where eyes roll at the role of religion in the civic sphere, often for good reasons – this was a big deal.
This morning, a new president was voted in Israel. Rivlin is a vegetarian, Likkud member – secular Jew, and I’m not holding my breath for news of his peace making – among Israelis, Jews or residents of the Middle East. A few years ago he famously labeled my form of Judaism “idol worship” and it’s unclear whether he will recognize me as a rabbi once I am ordained. Perhaps he’ll change his views.
Perhaps.
But I will take a moment now to quietly recite a prayer, that he, too, blessed by the mantle of leadership, will be humble enough to see beyond the here and now, reach out to other leaders of region and religion and beyond, submit his will to greater forces of good, make history happen, make sense,  make love between all people, and yes, dare I say it, help make real peace.
Thank you Mr. Peres. May your prayers be heard too.
And may the Mysterious One  making peace possible above and below, help us make more peace within and everywhere, right here, right now, for all of us, somehow, together.

One thought to “What the Pope can Teach Israel’s New President. Perhaps.”