amichaiApril 11, 2014general, Season-SpecificComments are off for this post
I put a stone on the Seder plate today, picked it up from desert floor, instead of bitter herbs which we couldn’t seem to find. Along with matza, an egg, some local weeds torn from the ground, a cup of grape juice and even an orange, this was the ceremonial dish at the center of a fairly chaotic Pre Passover Seder held under the bright sun, right outside the Holot (“sands”) detention Center for African refugees and asylum seekers in the Negev Desert, way way down in Israel’s south. 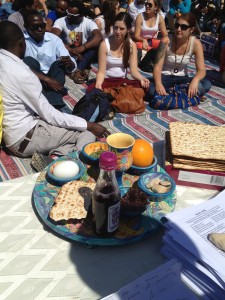 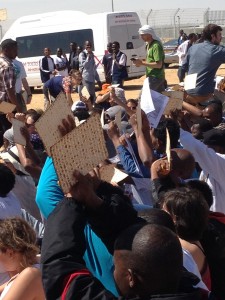 Why Stones? I had to improvise, and every one of the detained men I spoke to today mentioned the long walk through the desert, the fear, the cold, the thirst, the stones in their shoes. In 2014 desert stones stand in for bitter herbs. These men aren’t slaves and Israel is not the Pharaoh, but they are not free to go, and there is yet no Moses, and the pain is pain no matter what.
We drove down from Jerusalem, some two hours, to join over 100 Israeli activists who held this Seder of solidarity with the thousands of these detained men from Sudan and Eritrea who’ve been held here for months, with no release date in sight.
It’s a messy situation.
Rachel Tiven, with whom I drove, is an expert in immigration law, and published this powerful and insightful op-ed  about this issue just this morning, reminding us why as Jews the moral thing to do is to do everything we can to help those who flee persecution find a home or at least a hearing, and a welcome and a humane attitude. Israel, I’m sad to say, is doing a poor job at that for lots of complicated reasons. 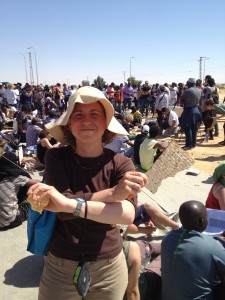 I met Muhammad, 30 years old Sudanese man who watched his sister get raped and killed and then fled by foot. His parents are now in a refugee camp in Chad. He reached the Israeli border three years ago, was immediately placed in the nearby prison for two years, and five months ago removed to this detention center. This is much better, he says, but only just. He is fed, and gets TV, but wants to go out and start his life. No Hebrew lessons are allowed at Holot, though there is English taught there every day. Israel wants Muhammad and his friends out of here, regardless of their status, asylum status or ability to be part of the country. Asked how we can help he points at his cloths – all donated, and asked for books in English and if possible a soccer ball. They don’t get visits from any clergy, and it isn’t clear if legal help is happening as should. We didn’t ask if they get condoms. 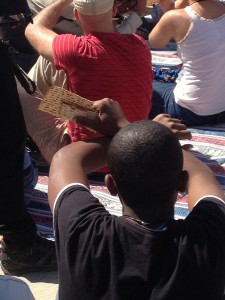 As we drove down I thought about the date: April 11. On this day, in 1945, my father was liberated from Buchenwald, a German Concentration Camp. he made his way to Palestine, an illegal immigrant, guilty of nothing but his race. 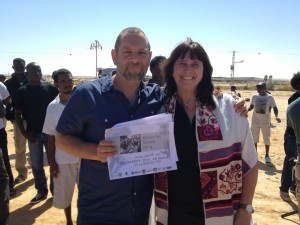 How little have we learned from that. Rabbi Susan Silverman, who along with her husband Yosef Abramowitz and their children helped to organize this event spoke up about the shame of being children of freed slaves who will sit at Seder tables this year ignoring the crisis at our threshold and the plight of others while we chatter on about enslavement and the call for freedom. What can we do to wake each other up?
When we say this year LET MY PEOPLE GO I want to believe and remember that we don’t just mean our race of former slaves from a Biblical saga long gone. I want to insist that Muhammad is my people too, along with all his friends, asylum seekers who are fleeing Pharaohs and deserve the chance to start again, with freedom, dignity, no stones in their shoes and a smile in their hearts. Each year at our Passover ritual, I told Muhammad, we pray for ‘Next year in Jerusalem’ and what we mean is that hopefully next year we’ll live and be in joy and peace. Where do you want to be next year, I asked him. He smiled and shrugged and said: somewhere to call home.
We drove away and I remembered what my father told my about his visit to Buchenwald in 1995: The best thing was to get into the car in the parking lot and drive away like a free man – and go home.
Let my people go.
Shabbat Shalom.