Why I Wore My Father’s Medal Today.

On April 11th 1945 Buchenwald was liberated and my father Naphtali, 19 year old Jewish prisoner, was liberated, along with his younger brother Israeli, age 8.

In all the years since, April 11th has become my father’s celebrated birthday, a quiet opportunity for a drink with the family, a few words of gratitude.

This year is the first time we are marking this day since his death, just five months ago. The 11th falls on the last shabbat of Passover, leaving us with the taste of liberations ancient and more recent, and also with the knowledge that this year – and with each passing year and the passing of survivors, the memories fade and it becomes the responsibility of the next generations to keep the stories, symbols, rituals, alive.

For me, April 11th is not just about remembering the horrors of the Holocaust, and the human brutality that creeps in through doors of racism and  sexism, ethnic or religious divides. Now it’s also another way to remember my father. But there’s more. April 11th is the shared code-word for many I’ve met in past years – with similar stories. Some are children of other Buchenwald survivors, some had fathers who liberated the camp. This date has become a private but increasingly public marker of the power and the possibility of radical hope and of persistent faith that freedom will prevail and the injustice will be met with firm resistance and resolve.  This date has become a placeholder for belief that beyond our solitary existence, greater truth and loyalties exist and matter, worthwhile living for, surviving for, fighting and waiting for.

Somehow, sub-human, starving and freezing, my father and his brother survived to see the Americans drive through the gates of Buchenwald on April 11th. When I asked them about what helped them cling on to life without knowing that redemption had a date, my father pointed at his brother and said that it was the sense of responsibility. He promised his parents that he will take care of his brother and continue the family’s rabbinic line. My uncle first said ‘jam’ – every once in while he got a teaspoon of it. In later interviews he spoke of faith.

So I wore my father’s medal today. This medal of honor my father received when he went back to Buchenwald in 2005 to mark the 60th anniversary of liberation. He joked about it after – ‘look! I got a medal for surviving!’ but he kept in his desk with the rest of the memorabilia. In the days following the shiva, as we began to sort through and re-organize the house, there was the medal, and I asked to keep it. I wore it once so far, at a recent event honoring the 70th anniversary of the liberation of Auschwitz. 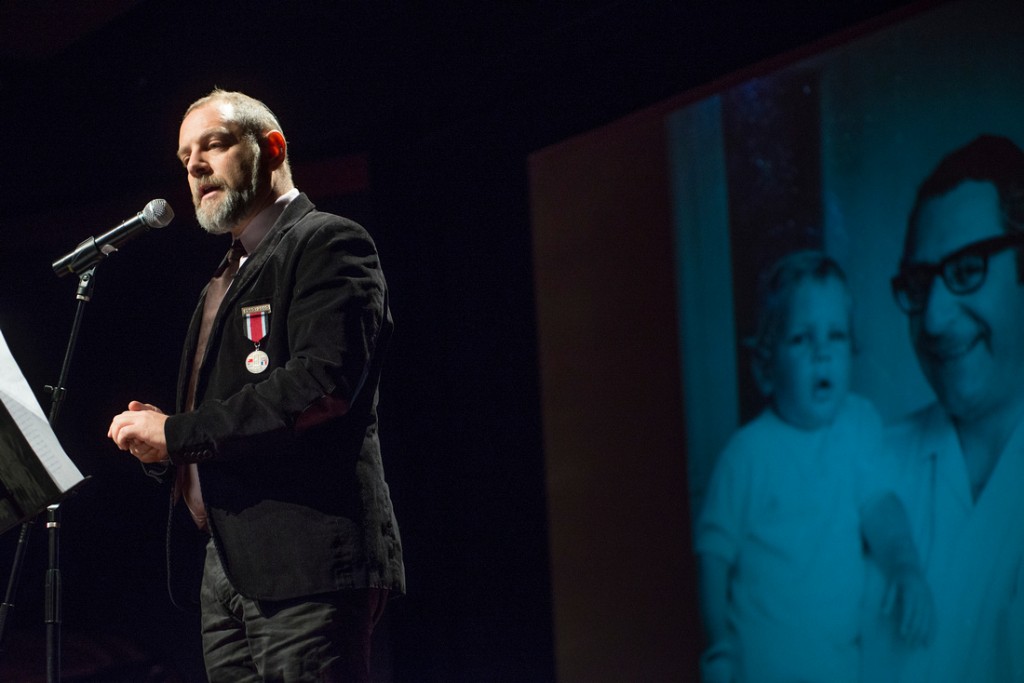 Today I wore the medal as I went to recite the mourner’s’ kaddish in my his memory, in a local shul nearby. Then I wore it to a special performance  – James Lecesne’s astounding one man play about the life and death of a gay teen struggling for dignity. This preview was presented for The Trevor Project national youth counsel – offering LGBT teens a hot-line and lifeline to keep on believing that it will get better and that they should be loved exactly as they are.  I wore it to remind myself and others that there are reasons to hold on to hope.

Those (few, this IS NYC) who asked about the medal were told about its story and held my hand, a meaning making moment in the middle of our lives.

In an article published this weekend in a North Carolina newspaper, just ahead of Holocaust Commemoration Day that falls this year on April 16, this question caught my eye:

“Will the Holocaust still matter at a time when widespread killing around the world has become old news?”

Every day brings horror stories of recent atrocities around the world. Rwanda and Darfur, Yarmuk or Yazd are just a few names of unspeakable genocides and inhumane realities – some happening right now. Anti semitic attacks and domestic abuse, terrorism and gun violence are just more horrors on the never-ending list of human-made evil.

So why still focus on what happened to our people 70 years ago? Menachem Rosensaft, son of survivors, lawyer, community leader and editor of From the Ashes, a recent book containing the stories of 88 children and grandchildren of survivors – myself included, has a reply: “The Nazi death camps, Rosensaft said, which necessitated the complicity of industries, governments and millions of ordinary people, remain “symbols for the potential of evil.

“It would have been extremely easy in 1945 for Holocaust survivors to give up on the world,” Rosensaft said. “Instead, within weeks or months of liberation, they returned to life with a vengeance.” Read the entire article in the Charlotte Observer

On April 16th, at Temple Emanu-El’s Skirball Center in NYC,  I will have the honor of joining Menachem and a few other distinguished writers and local leaders, all children and grandchildren of survivors, to keep the legacy alive. Who knows, I may again wear my father’s medal in his honor.

On this day I pause to hope that all memories live on as in us as blessings, tools salvages from our histories to make our world a better place – for all.