amichaiMay 2, 2013Weekly Torah Blogs, WORDComments are off for this post
WORD: A Word a Week from the World’s Best Seller. Follow the Annual Torah Re-Run Series with Amichai Lau-Lavie’s Newest Year-Long Blog. To subscribe via email click here. To listen to the audio version click here. 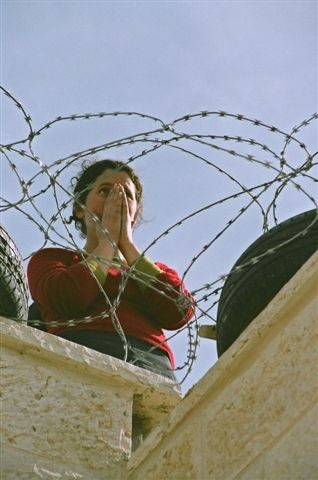 I rent. I’ve been a renter of real estate for my entire adult life.

No ideology – partially for practical finances, partially because I am often between Israel and the US – a foot in each world upon this earth. Where is home? both here and there. I am aware, and constantly reminded, that this is not the wisest fiscal choice, and nowadays, with some savings, can actually start to envision and plan for a modest purchase and investment in a home, but on the whole, right now,  I am a renter, and there is a great deal of freedom that comes with that.

In some way this is the ancient legacy of my people. The word Ivri – Hebrew – comes from the verb ‘ever’- crossing over, transient – the nomadic lifestyle, no attachment, pick up and go when it’s time to do so.  This has to do with how we live within, and not just with where we live and why.

The tension between nomad and settler, home owner and temporary dweller, citizen and migrant,  is as old as the human race for prosperity, property and progress.

It’s been a Jewish tension for as long as we remember, extended over exiles and diasporas, temporary homes turned into new homelands – from Babylon to Brooklyn.

And this is the tension that is making the promised land into the land of sour, bitter, painful quarrels, every single day.  Is the price of the promise too high?

Just this week, a Jewish settler, father of five,  was stabbed to death by a Palestinian man at a junction in the West Bank. In response, raging settlers torched fields and homes, smashed cars and attacked several Palestinians, at least one of whom, a Palestinian street cleaner, father of 4, is in critical condition.

There are many layers for this rage but the ownership of land is at the heart of the matter.

Also this week, without much media attention, Israel’s supreme court granted the Israeli Government’s request to postpone the evacuation of the tiny settlement of Amona, scheduled for this week.

Amona, located in the heart of the West Bank, is an outpost founded illegally in 1995 on primarily privately owned Palestinian land. The name comes from the Book of Joshua, where Kfar Ha’Ammonai is mentioned – the village of the Ammonites – a reminder of the local indigenous Canaanites that were wiped out by the invading Israelites, as instructed by Moses.

In February 2006 the Supreme Court ordered the dismantlement of the nine permanent homes built in Amona. Thousands of protesters gathered and clashed with Israeli army and police when the time came for the demolition and eviction. The violent clashes, with more than 300 wounded, surpassed all previous clashes between the security forces of the State of Israel and civilians, including the 2005 unilateral disengagement from the Gaza Strip.

The government recognized the illegal use of Palestinian land in the majority of the Amona area, though some of the settlers are contesting this. Under the Supreme Court’s ruling the evacuation of the entire settlement was scheduled for April 2013. The most recent postponement comes so that the new government can have time to reorganize. The judges were severe in their ruling that this delay is ‘beyond the measure of the law’ and set the date for July 15 2013 – I don’t know if they knew that it is Tisha B’av – the fast that commemorate the destruction of the Jewish temples and the exile of the nation.

Who knows what will transpire in the political corridors before this actually happens – or not. But the Amona story is just one of many. And with no solution in sight, it seems to me, and to many others that the only way out of this lockdown is a new approach to the ownership, use, and attitude towards land.

Imagine a world in which nobody owns land. We all rent. None of us are land owners, all of us are temporary dwellers, modest guests of planet earth.

Roll your eyes and flip the channel – but this is not a new idea – it is in fact a Bibilal idea.  Even if it was not ever fully implmented. I mean, lets face it: Real estate is a big business for Jews and the real story behind it is very old and pretty complex – and you can find glimpses of it in this week’s Torah text – B’har B’chukotai, which describes the vision for a healthy society, living on earth, rooted in justice. The secret is in the details of the cycles of seven – every seven days we pause, every seven years is a fallow year, a chance to let the land rest and the people too; every seven cycles of seven is the jubilee – all homes go back to the original owner, debts are free, we start again.

It’s a radical notion. God, as recorded by Moses, could not be clearer:

And the land shall not be sold in perpetuity; for the land is Mine; and you are visitors and temporary dwellers upon it, along with me.

Imagine that – in a close reading of this verse it seems that even God is no owner- the very notion of the Divine is not rooted in the ownership of land: the security and peace of mind comes not from deeds for the home – it comes from the trust that nothing is permanent, and yet a roof is sheltering us at night, protecting us from the rain, from foe, from fear and cold and hatred.

Imagine a world in which we are all renters, with the mindset that takes away the wars that ravage our sacred earth, in so many ways, every single day.  It changes the way we say ‘mine’. It let us say ‘ours’. Can that change the reality on the ground in the Middle East? All over the planet? In your own home?

Can this radical mindset change the crisis that is threatening to turn the dream of a Jewish homeland into a nightmare for all involved? Can it alter the way greed it destroying earth?

What will it take to change our attitude about ownership and use of land? towards the most appropriate relationship with property?

I’m writing this on a plane, far from land, on my way from Israel to NYC, about to launch a congregation that at least for now is homeless by design – a pop-up, renting, transient sanctuary that celebrates the fact that we are always on the go, Hebrews through and through.

Beyond brick and mortar there is, perhaps, another vision waiting to happen, a way for the sacred to aspire, for us to ascend to the highest potential of our being, while deeply rooting us in the gravity of here and now.

In the diverse ecosystem we live in – there’s room for all: homeowners and renters, feudal lords and homeless people, settlers and wanderers. If only we were able to heed the word of Leviticus and find ways to let go, detach, be kinder to each other, to the earth that is home.  It is one earth – belonging to all. The word Earth is even  the same word in Hebrew and English, and in Arabic too.

For the people of Palestine fighting for their homes,  for those reading the Torah as the road map for establishing a holy land, committed to their truth and faith; for all of us fighting to occupy a new reality of justice on earth, roomates and neighbors, future partners in being stewards of life on earth: May we culitivate the landscaope of love, Leviticus style, and learn how to live together better.